In June, our (grown-up) kid from Toronto came for a visit. Since it’s only an annual event, I took time off work and made a proper vacation of it. We made a plan to get everything done:

Since Link usually visits in December, we wanted to do some summery things. We strolled the Public Gardens, walked our favourite beach, and made a day trip to Peggy’s Cove. You might think Peggy’s Cove would be highly over-rated and just another fishing village and lighthouse, but the geology is amazing. It sits on a remarkable outcrop of granite. I can’t get enough of the glacial rockscape at the site – the agile can climb on the rocks for a couple of hours and get stunning views in every direction. We love it!

Link cooked several meals for us and it was a good counterpoint to all the dining out that week. We were hoping to watch some Studio Ghibli DVDs together and just managed one, Arrietty, which I had missed at the theatre.

We visited with Link’s grandparents, aunt and uncle several times over. (New readers: Link is genderqueer and transgender, and they came out in stages to the family over the past 10 years). Once again, I counted my blessings. Link showed up with facial hair/scruff and no one batted an eye. The older generation still struggles with new names and pronouns but it is clear their hearts are in the right place. While there is probably a lot that they wilfully ignore, family belonging comes out on top.

My brother and his partner have a new home and they invited us over for a campfire and toasted marshmallows. Bonfires were a feature of our family reunions, which stopped a few years ago due to numerous folks being unable to travel, so I hadn’t been at a campfire in years. It is so relaxing to poke at the embers (and less so to live with the bug bites!) Rom is terrified of charred food and had the most lightly toasted marshmallows ever 😊

Besides extra meals out for Link’s visit, we tried out the new local Turkish restaurant (will definitely return), had everyone over for Father’s Day, and went to a deluxe brunch for our anniversary.

I saw a few movies in June but nothing like May’s marathon. In university, I had studied Peter Shaffer’s play Equus, but had never seen a production of it. I remember acting a scene from it in class. Since I was not an acting major, I played Hester, a very manageable role compared to the rest! The movie (1977) was quite a tour-de-force, and was even more sexual than we innocent 18-year-olds ever imagined when we were students. After watching the DVD, I re-read the play. What stood out this time was Dysart’s envy of Alan’s passion, even though it was misdirected. Shaffer is quoted as saying, “Passion, even unholy passion, has something enviable about it.” I won’t speak to the plot, but if you love horses, don’t watch it!

Then I re-watched Amadeus (1984), also based on a play by Shaffer, which I hadn’t seen since its release 30+ years ago! Shaffer imagines that an undistinguished contemporary of Mozart, Salieri, was so jealous of Mozart’s talent that he schemed to destroy his life and eventually kill him. It was a wonderful period drama, but I did find it dated in the way that Salieri spoke to the audience in long monologues, a technique Shaffer also employed with the character Dysart in Equus. 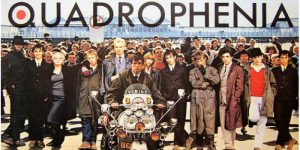 Next, we went to a nostalgia screening of Quadrophenia at a local theatre: a movie from 1979, the same era as the two above. I had only seen it once before, in recent times, and I had to puzzle out the ending/beginning, which left me feeling somewhat hopeful. Quadrophenia is set in 1964 in London and Brighton (two cities that Rom and I visit every year), and it’s based on a real-life battle between Mods and Rockers. Ultimately it is about a young man’s fear of growing up and “working for the man,” choosing to immerse himself in youth culture instead. The film reminded me that “teenagers” are a recent phenomenon and before their invention, youth were not indulged with an extra decade to grow up: the working classes were sent out to work as children and were not supported by their parents. It is an exceptionally grim movie, but the settings (Brighton Beach and Beachy Head) were spectacular on the big screen. It was an immersive experience, and food for many discussions.

Interestingly, Quadrophenia had something in common with Equus: clearly, the writers/directors believed in the romance of young men’s passions, even when they were destructive to themselves and others. They both speak to (some) older men’s nostalgia about the vigour of youth. Of course, I could debate the romanticization of macho culture all day!

Today I’m hoping the rain clears in time for the concert and fireworks tonight. I am celebrating Canada Day but with a much-improved awareness of how our country came to be.

How was your June?

If you have adult children who visit, what kinds of things do you do together?