Last month I only read one lengthy book, so I blitzed a bunch of short ones in May and had much more fun with them. Here’s my round-up:

Since my kid has left home, I’ve reflected a lot on my style of parenting: what worked and what didn’t. Like a lot of people, I am not convinced the current North American/Western style of parenting is best for kids. Of course, I was part of that scene myself. This book tells the tale of an American couple who raised their young children in Paris. The author very deliberately examined how American and French families differ, and used her own observations, as well as questioning everyone she interacted with. What she found was that French families put their adult lives and their marriages or relationships first, and don’t accommodate to their children as much. They use more subtle and consistent discipline, and are not afraid of giving their kids structure and rules. They want their kids to fit in with French society – parents teach kids social expectations, such as manners and good eating, from a very young age. They see childhood as less a time of indulgence, and more a training ground for its future citizens. To top it off, the French government supports working parents with almost-fully subsidized childcare, preschool programs and deluxe meal plans.

I liked the book because the author put effort into speaking with local people and getting to the heart of how their thinking differed from her own. Next I want to read Battle Hymn of the Tiger Mother by Amy Chua, to compare the two!

The 100 Thing Challenge: How I Got Rid of Almost Everything, Remade My Life, and Regained My Soul – Dave Bruno

This book had a cool concept but was short on the execution. The author got tired of his consumer lifestyle and decided to reduce his number of possessions. He set his own rules, which is fair enough, but he made a lot of exceptions. For instance, his spouse and kids carried on as usual and there was no impact on their belongings. I became quite impatient with the author when he told about all of his attempts to start and run his own businesses – it sounds like his family really had to suffer through some tough years because of his determination to stick with his own business plans. I respect that he did some soul-searching and tried to find personal happiness rather than upward mobility. Overall, the book is an expansion of a blog, and it probably worked better in that format.

Try instead: All My Life For Sale – John D. Freyer, or No Impact Man – Colin Beavan 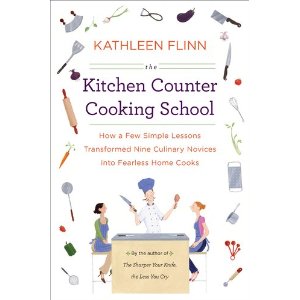 I loved the opening of this book. The author, a newly graduated chef, followed a woman around the grocery store and started offering her suggestions on how to improve her purchases. The shopper had no idea how to cook real food such as a whole chicken. So the chef offered to teach her, and she recruited 8 more non-cooks to learn the basics as well. The author visited their homes and found out what they usually cooked and ate, and what they felt “ìnsecure” about cooking. They met regularly in a commercial kitchen and learned how to make simple, real meals from scratch.

I was fortunate enough to have a mom who cooked everything from scratch, but it’s not the norm any more, and I hope more people have access to cooking schools and community kitchens to re-skill themselves! In fact, I am hoping to take some workshops on canning this summer, as well as helping my mom with her pickles and preserves!

Nina Here Nor There

Nina Here Nor There: My Journey Beyond Gender – Nick Krieger

As the parent of a trans person, I have read lots of memoirs and personal writings by trans and gender queer folks, hoping to gain information and insight into the human condition. I was immediately drawn in because this is the world my young-adult child inhabits, and it is drawn frankly and vividly. If you ever wanted to know how it feels to live in a queer-friendly environment, talk about sex and gender openly, obsess over all the decisions needed around hormones and surgery, and know how it feels to deal with your parents and meet new people and date and have sex while changing bodies – this is your book! If not, open your mind and read it anyway. Whether this is a whole new universe for you, or you have some prior knowledge, Nick will walk you through the trans journey and reassure you that we’re all valuable human beings.

This is a photo book about the renaissance of Brooklyn neighbourhoods into hipster havens. It shows how the areas used to look, how homes were restored with attention to retaining the built-in charming features such as mouldings and parquet floors, and how new in-fill homes were built in sympathy with the character of the streetscapes. Brooklyn (Williamsburg, Park Slope et al) seems over-exposed now, but the book brings us back to how it got that way. If you like city living, this book is drool-worthy. The creativity of the architects and homeowners wowed me! 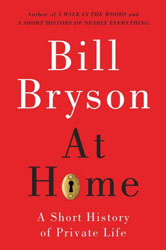 At Home: a Short History of Private Life – Bill Bryson

Bill Bryson seems like a really personable guy, like a genial radio host on CBC, PBS or BBC. In this book he uses a tour through his own house in the UK – an historic vicar’s estate – as a pretext for telling us all about the history of home life. He goes through the history of cooking, dining, sleeping, bathing, visiting and decorating. He writes about furniture and staircases and cellars. He discusses how homes improved with the invention of each new building material. One device he uses throughout is telling us how ordinary people happened to make astonishing inventions, given their backgrounds, education and opportunities. If I were a homeschooling parent, I would be all over this book! He has a huge back catalogue, and I will definitely be reading A Short History of Nearly Everything sometime soon.

On the Outside Looking Indian

On the Outside Looking Indian: How My Second Childhood Changed My Life – Rupinder Gill

As a white, middle class Canadian, with many privileges, I don’t “own” the experiences of children of immigrants. But I have always felt a bond with Indo-Canadian kids, because their home culture is so severe compared to their public school classmates’. My parents were very strict, out of sync with the other families in the neighbourhood, and even stricter than their own parents, and my aunts and uncles. I always felt I had to live up to standards that other kids my age did not, or face my parents’ anger and disappointment. Unlike the author of this book, however, I learned by age 13 to live a double life and not tell my parents anything 🙂

I have read dozens of books and watched dozens of movies about India and Indian immigrants, and in comparison, this one is written with a light touch. The author takes distressing and weighty topics, such as racism and exclusion, and spins them into a humorous memoir. The crux of the tale is that the author feels she missed out on the North American childhood she wanted, so she set herself a series of challenges at age 30 to make up for lost time: going to Disney World, taking dance classes, learning to swim, owning a dog, and more significantly, quitting her job and moving to New York. She makes peace with her past, in her own way, but I was left feeling she has a long road ahead in coming to appreciate her heritage. And I liked that, because people don’t wrap up their childhoods and leave them behind at age 20 or 30. You come to a new understanding of your upbringing and your parents’ views every few years as you go through more life stages yourself. So the best thing about this book is that it will encourage you to examine your own childhood and how you saw your parents then and now.

That was my month in books!