Dar and Rom – A Love Story

It’s not everyday that two people from opposite sides of the Atlantic meet in their mid-40s and live happily ever after. No, wait, it probably is every day! But maybe it hasn’t happened to someone you know.

In 2007 I had reached a tipping point in my life. I had moved back to my home town, I had kicked my career into high gear, my child was settled in school, and I realized it was the end of an era.

I had been single for 10 years, during which time I’d had three committed relationships (serially, not at once!) and each time I had ended it.

The first guy (yes, they were all men) was 10 years older than me and was in a different stage of his life. I had a 7 year old and his youngest was 17. He wanted companionship, but not a new family.  The second guy was an extrovert and a comic, but underneath, he was a relentless pessimist, and I just couldn’t expose myself and my child to his buried negativity forever. The third guy was a waffler, or to be charitable, he didn’t know what he wanted from life at that time.

You could say that the common denominator was me, and that I must have been the problem. Fair enough. The “problem” was that I was holding back, being strategic, and not settling. It came down to the fact that as a twosome, Link and I had a really, really good family life. There was no way I was going to jeopardize that by inviting the wrong person in!

So towards the end of 2007, I decided that I would opt out of relationship-seeking. Link was 14 at the time. I would start building a nice life for myself while Link was in high school, to prepare myself for being alone later. Maybe I would try dating again after Link left home, or maybe I wouldn’t want to.

In 2007 I had an exciting new job. I was still spending my time, as all single parents do, on work and family activities, but time was opening up for my own interests. I had immersed myself in music again, and I was writing a music blog. It was on a web site called MOG, now defunct, which was a platform for music blogs. There was a regular group of “Moggers” who were tight online friends. We all still keep in touch on a Facebook page!

You might remember that 2005-2008 was the time when everyday folks had finally integrated text chat, video chat, Facebook, Twitter, Flickr, YouTube, and other social media into their lives. Actually, MySpace was still big then 🙂 It was a fun time to be online and cautiously make new friends while setting a good example for one’s teenager! I scrupulously avoided online dating sites.

I’m sure you can guess where this is going. Rom and I used to comment on each other’s music posts and we started exchanging personal emails. But not that personal – they were about our nerdy interests like Miyazaki movies. We were part of a big social circle of bloggers on the site. After a year of platonic emails, Rom was offline for a while and I wrote with some concern about his absence. It turned out he was in the process of moving, but his reply opened the door to more personal sharing.

There ensued a breathless 3 months of writing long epistles to each other every day and realizing there was more to it than being music fans together…not to trivialize the importance of that! Rom was self-employed in the UK. He had also recently decided not to date, but was not yet a curmudgeon, LOL! He didn’t own a house or have children, which made a big difference to our developing story. We gradually broached the idea of meeting in person, and it seemed that he was more free to be the first traveller.

In June, 2008, Rom cleared his calendar, I took vacation time and he visited me in Canada for two weeks. To be on the safe side, I sent Link to stay with nearby relatives so that I could deal with the drama – if it was a terrible mistake, I didn’t want Link to witness all the humiliating details! Needless to say, the whole process caused a big stir and Link enjoyed teasing me about meeting a stranger on the Internet. I decided that if Rom was nice but just “not for me”, I would still show him around town. He could return home after a relaxing, non-romantic vacation.

Rom was the last one on his flight to clear customs because they didn’t believe a single guy would come to Canada alone for just a vacation – they thought he’d flee the UK and try to stay and work in Canada. The Border Services officer came out into the airport lobby to see if someone was really there to pick him up!

Over the next two weeks, we went to tourist spots, and shopping, and had meals together. We spent time with Link, and with my parents, and I trucked on with some routines and errands. We walked through a field of lady’s slippers in a park, and set sail on a whale-less whale viewing boat trip, and almost got blown over a cliff at a seaside campground. We talked about music and Buddhism and gender theory and economics – as we still do. And that is how a couple is made!

By our parting date, it was inconceivable we’d return to our old lives. A page had been turned. 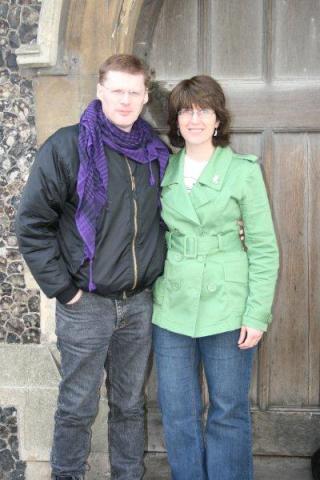 An early trip to the UK

In August, I visited Rom in the UK; he came back in October and December. Link and I went over in March; Rom came back in May. Along the way, we decided to get married. There wasn’t a proposal. It just came up in conversation as an option and we thought it was the best one. To be honest, neither of us was specifically marriage-oriented, but we planned to be together and had no serious objection to marriage either. In fact, given the immigration question, it seemed like the practical choice, too.

Rom elected to move to Canada and join our family. If he hadn’t, we probably would have continued our trans-Atlantic relationship for a couple more years until Link finished school. I don’t know if I could have left the country after sending Link off to university. What would there be for Link to come home to, then?

I explained to Link that we were getting married after just one year because we were mature adults who knew ourselves and our life trajectories very well, but a young person could never, ever do that! My immediate family were a little concerned that I could be falling prey to someone who’d benefit from a sponsorship to Canada. It was a bit unclear to them that Rom would be giving up a successful business to start over “for love”! I think what won them over was that Rom always visited them whenever I did, and attended all family and community events with me, and genuinely enjoyed them in a non-ironic way.

I am now proud to say that my parents know Rom is kind and true, and that their daughter is happy at last.

After the ceremony – play time!

We had a little, but formal, wedding ceremony in June 2009. Then Rom had to go back to the UK and wait for the immigration process to resolve itself. I could visit him during that time, but not vice versa, without risking his status. Luckily it was uncomplicated, and took a mere 5 months. Rom moved to Canada permanently in December 2009 and now he is ours 🙂

I could go on and on about Rom’s good qualities, like the way he always makes me laugh when I am feeling discouraged, his loyalty and sense of honour, his willingness to fix all of my family’s computers even when he does the same thing all day long at work, and his help in launching our Very Queer Child (!)

We are an especially good match in that we both like to theorize and explain things, and we both have absorbing hobbies, and both read a lot, and like to cook, and really don’t like to travel that much now that we don’t have to.

In 2007 I had a really, really good life and I was terrified of attaching myself to the wrong person and messing it up. Rom is entirely, completely the right person, and he has added more layers of happiness to what I already had.

One saying that stays with me is, “Happiness is not just the absence of suffering, but the presence of joy.”

I am so fortunate to be in that place right now.