READING DOWN THE HOUSE Report # 7 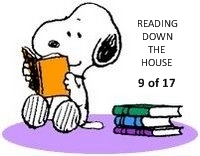 Snoopy is by Charles Schultz

I read 5 books this month. Three of them felt like “work” to read. Not exactly reading for pleasure, then! 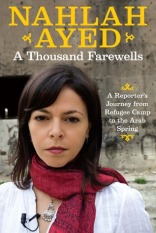 A Thousand Farewells by Nahlah Ayed

First of all, I belong to a book club that reads “international fiction,” set in developing countries. Almost all of the books involve war, conflict, corruption and poverty. The content is more challenging than I would choose if reading on my own. The good parts are that I learn about other regions of the world, and we have great discussions. The bad part is that the books can lead to a sense of hopelessness. Don’t get me wrong – I like to feel the emotional impact of life stories, and it inspires me to “do something.” But after 8 such books, I wonder if I’m getting desensitized.

This month’s book club choice was A Thousand Farewells by Nahlah Ayed. Nahlah had a shocking turn of events in childhood. She was born in Canada to Palestinian parents. When she was 6 years old, her parents worried that their kids would become too Westernized. So they uprooted and moved back to a refugee camp in Jordan where they remained for the next 7 years. There was no work, so eventually her dad returned to Canada without the family and sent money back for their living expenses! They eventually reunited and stayed in Canada, where Nahlah studied journalism and became the Middle East correspondent for CBC television news. I was transfixed by her growing up story. The rest of the book describes her 10 years covering conflicts in Iraq, Iran, Syria, Jordan, Palestine, Lebanon and Egypt. I learned a lot about the history of the conflicts in that area of the world, but I found the book slow going and would literally only read about 5 pages at a time before wandering off. I was also a bit vexed that she said zero about her personal life during those years, leading us to think she had no personal life and was “all business.” The contrast between her childhood “tell all” and her later silence about personal matters was too great. I thought about whether I would have different expectations of a male journalist’s story and the answer is no.

I like and admire Nahlah Ayed as a TV journalist (most of us in Canada know her work on the CBC) and for those living in the right country codes, there’s a snappy interview with her here: 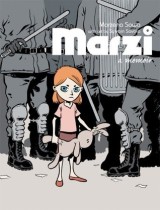 I read another book about oppressed people this month. I am not usually a sucker for tragic material! It was the graphic novel Marzi by Marzena Sowa. I love the cover art! It’s a memoir about a young girl living in Communist Poland in the 1980s. I would give this book 5 stars for authenticity. The author captured her childhood experiences in vignettes of 2-4 pages, each one a little comic strip of daily life. I read the book in “bits and bites” throughout the month, as I did with A Thousand Farewells. Marzi (the character) was a three-dimensional person. I found myself irritated with her at times, just like I would be with a real child! I found the book had too much content about the minutiae of everyday life. If it had been serialized in a weekly newspaper, it would have been just right. It’s a good thing I’m not an editor. I would have cut the book by half and put the rest online as a web comic! Later I found out its original publication had been in 5 volumes. Once again, I learned a tremendous amount about her time and place. Marzi’s trying to understand politics by listening to grown-ups reminded me of when I was a child trying to understand the FLQ and Watergate! 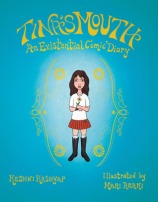 Another graphic novel I read was Tina’s Mouth by Keshni Kashyap. This one was right up my alley, being the coming-of-age tale of an intellectual teenager keeping a diary for her high school class on existentialism. Amusingly (or maybe not, given his dastardly treatment of women), she addresses the diary to her idol, Jean-Paul Sartre. In it she muses about her heritage, family, school, friends, boys, and the meaning of life. Once again there is a great teenage party scene (something I also appreciated in Anya’s Ghost). I liked the art: the drawings look like drawings, not comic strips.

Spoiler Alert: The book has a conclusion, but doesn’t wrap up neatly, which made it both more realistic and more existential! 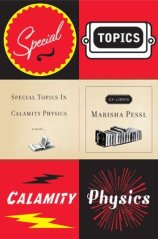 Now for the whopping big book with which I ended the month: Special Topics in Calamity Physics by Marisha Pessl, this month’s Reading Down the House book. It seemed to be a coming-of-age tale about a precocious teenage girl who is immersed in great literature. For the first two-thirds of the book, the narrator, Blue, is characterized by detachment. For this reason, the book wouldn’t appeal much to teens (even mature, literary ones). Her tone prevented you from caring more. The book begins with two dramatic deaths, jumps to other topics, and resolves the deaths at the end. I did love the relationship between father and daughter, and how it was based on books and literary life lessons – to an unhealthy degree. (Most of the citations are fake, but they are so specific, they sound credible). A group of high school students were key to the story, and I didn’t find their interactions believable, nor the way they crushed on a particular teacher. The lengthy back story about the teacher herself was entirely unconvincing. Oddly, the book turns into a murder mystery in the final third and becomes quite compelling. I only wish that Blue had cared about the rest of her time with us as much as she cared about the outcome of the case! It’s rare that I dislike a well-reviewed literary bestseller because I can usually see what the reviewers saw in it. Oh well! 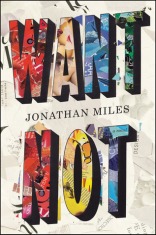 Want Not by Jonathan Miles

I read one book I truly enjoyed this month: Want Not by Jonathan Miles. It had three story lines tied together by a common theme: what happens to our trash? Every character in the book explores excess, greed and waste in some way. It starts with Talmadge scavenging garbage piles for food in NYC. We meet his partner Micah, who grew up off-the-grid in a backwoods hideaway. The story jumps to Elwin, a linguist who’s been appointed to a panel developing signage for a radioactive waste dump. Meanwhile he deals with the remains of a deer he’s struck with his Jeep; and his father’s difficulties living in a nursing home. The third story is about a mother and daughter who, after a doubly-horrific 911 experience, let a new man into their lives, who turns out to be a classic sleazeball (or is he?) In the tradition of men’s literary fiction, the book has many gross-out scenes, but they are very pertinent to the theme. The book is full of humour, pathos, heart-stopping action (Matty! Alexis!) and ruminations about the wastefulness of our society. For the strong of stomach – I highly recommend it!

I am feeling grumpy because most of my reading this month was educational but not fun. So for May I am going to read some light, fluffy and varied books to compensate, starting with Sue Townsend’s The Woman Who Went to Bed for a Year. I will be picking something easy from my Reading Down the House shelf, too!

(FYI, I have been cross-posting book reviews on my Goodreads page)

What have you been reading?