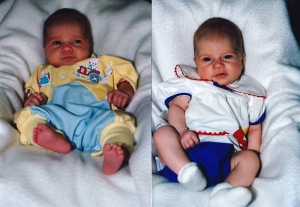 2 views of Link at 7 weeks old. You never know who they are going to be!

In my last two posts about my genderqueer and transgender “child,” Link (age 21) I focused on the transitions they were going through and what all the gender terminology means. I didn’t say much about my own reactions other than that I was trying to be supportive.

This time I want to tell you more about what it’s been like for me as a parent. Usually I downplay that angle because Link’s gender is part of Link’s story and isn’t mine.  Especially now that Link is an adult, I don’t want to co-opt their life. But when your child changes gender, it changes your parenting irrevocably!

I started as the single parent of one child, who was/is smart and strong-willed. And presumably a girl. I rarely focused on that. I had done my homework on child development and in true intellectual fashion, had filled the house with educational toys, music and books. We had cars and footballs and dolls and tea sets. There was daycare and school and playing outdoors and visiting relatives. We did a lot of LEGO and art. Two books had influenced me greatly: Anti-Bias Curriculum by Louise Derman-Sparks (1989, an early childhood education teaching tool) and Feminist Parenting by Dena Taylor (1994).

So did I have an agenda? Yes. I didn’t want my child to feel restricted by negative gender stereotypes such as: girls are helpless, girls should be seen and not heard, or “act like a lady” versus “boys will be boys.” My goals as a parent were to raise a future adult who would be independent, resourceful and competent. Like most parents, I undoubtedly pushed my kid toward interests in my own comfort zone: swimming and skating versus soccer and hockey; reading and music lessons versus TV and Super Soakers.  But I did push myself, trying to keep up with Link’s interests such as attending anime conventions together – in costume!

When Link first came out as a lesbian at age 12, I didn’t feel any need to be educated about it. I felt slightly different as the parent of an LGBTQ kid, but not much. I thought, OK, you are attracted to who you are attracted to; you love who you love. I was surprised and pleased that Link was confident enough to accompany a female date to the junior high year-end formal dances. So I thought, OK, that’s her path now. We went to Pride Parades!

I did worry about bullying. Link had friends in other grades and classes, and they stuck together in the school library because the cafeteria was downright dangerous. Link wasn’t close to kids in her own class. I went along as a chaperone on a school trip and my eyes were opened as to how different Link really was from her classmates. Being used to Link, those “conforming” kids seemed alien to me!

I mentioned Link’s sexual orientation to close friends and colleagues if it came up in conversation (“So, has she discovered boys yet?”) but relatives never asked. I knew that it was never OK to out someone, so I didn’t tell any close relatives: it was up to Link to decide who to tell and when. That eventually took place by age 16. The general consensus from my older relatives was that it was a phase or she was “just confused.” Questioning was accepted; affirming – not so much.

Link had been looking forward to senior high school (grades 10-12) because the school had a Gay-Straight Alliance club. I thought the insistent, low-level bullying and mean-spiritedness would end at that age. It did – it turned into ostracism. The GSA was good, but not sufficient. Link was miserable. It seemed there was no LGBTQ culture to move into. To be honest, I think it was made worse by the presence of two much-loved “fabulous” gay boys in the GSA. Link was the only lesbian at school, and did not feel fabulous. I educated myself more at that point. I hadn’t been very aware of the anti-female bias in the LGBTQ community. I read about how 70s feminists distanced themselves from lesbians, as did gay men. Lesbians were supposed to be polite ladies and stay home with their cats (or dogs), I gathered. Or just get married and live quiet little lives. I am sure Link figured out this bias long before I did.

During this time, I was trying to help Link figure out an academic path, and work on their art and sewing. I thought that by focusing on goals and life after high school, Link would see through to the other side. It didn’t work. You have to live your life, not skip it. I arranged for counselling for Link – which did help, especially with practical matters, like getting through grade 11. Visits to the family doctor were useless. No physical cause was ever found for those endless stomach aches, and Link refused medical care for depression and anxiety, trying to handle it solo. Things finally started coming together when Link realized they were genderqueer and gave up the labels of girl and woman. Link went through different incarnations of looking androgynous or masculine.

Meanwhile, there was a local organization that ran activities and support groups for trans youth, and they were a lifesaver. Link got back into anime and cosplay, and attended many events. So a new social life was created outside of school, and I facilitated that with endless drives across town, shopping trips for fabric and notions, and Parent/Kid chats.

The school environment never improved, but Link graduated with honours, despite having missed 1/3 of the final year’s classes. Link looked fabulous at prom with their top hat and tails. I couldn’t have been prouder when Link went off to fashion school, a welcoming environment if there ever was one.

I think I was smug in sending my “successful” genderqueer kid off to college, convinced that the peer pressure of high school was over and everything would be fine now. I was off the hook for those big decisions like hormones and surgery – Link was an adult and could decide! After Link started mentioning those options, I definitely did my research. I ran the gamut of emotions. I could understand Link’s desire for top surgery because they were so impassioned about it – it obviously had deep personal meaning. But I was really scared of the hormones. I had thought Link wanted to look androgynous, not male, and testosterone is not just about looks: it affects your health and longevity, your voice and skin and emotions.

Link was now alone in a new city and had no local support to make all these decisions. They were overwhelmed by the demands of classes, living on their own, and navigating gender. Link left school after one semester, but stayed in Toronto and started to form a tight-knit community of friends, all of whom identify as genderqueer and/or FTM (female to male) transgender.

Link and I were so close, surely we’d talk every day on the phone, right? Nope, Link was terrified I’d consider them a failure for leaving school, and not launching correctly after coming from a supportive home. Sometimes it would be 3 weeks between phone calls, sometimes 6.

That is when I knew for sure that Link was on a different trajectory. This genderqueer and transgender stuff wasn’t a problem that could be solved with name changes and surgeries – it was going to be a lengthy process, and it was going to disrupt Link’s life considerably. I could support through encouragement, but not direct their actions. Things would have to happen in Link’s own time frame – not only when they felt ready to take another step (doctor’s appointments, prescriptions) but when they felt like telling me, too. Maybe I’d know before stuff happened, maybe after.

I grew up real fast after that 🙂  This empty nest stuff was not going to be a piece of cake. The kid who left home isn’t the same one who shows us around Toronto in the summers and comes home for Christmas – they have their own life, with Matters of Great Import to resolve.

Link is still making decisions after two years in Toronto, and still struggling, personally and financially and gender-wise. I have learned that Link still values contact with home and at times even asks for advice 😉 Whenever we’re together, we lapse back into our comfortable old ways, and it feels fine. Like a proper parent of a new adult, I hold my tongue most of the time, and however much I am inclined to judge, I know I need to judge 90% less. I am proud of new things: Link’s new solo apartment obtained without mom to co-sign and Link’s crazy-cool sewing skills; but also Link’s progress each time they make a medical appointment or get an ID changed. Not what I was expecting at all!

You know how bittersweet it is when your “baby” goes off to school, or how bad you feel when your kid doesn’t get the part or doesn’t make the team? I feel like that a lot.  It was hard to leave my girl behind. I loved that kid. We were best friends. We looked alike and had the same mannerisms and exactly the same voice. And now we are two. In some ways, Link is so very separate from me because of all they have experienced. I never imagined my kid would have to deal with so much isolation and loss. But every day I marvel at their courage in being true to their own vision. If it’s exciting and scary for me – twice so for Link. I can’t look back at Link’s childhood to see who they are going to be – I have to look ahead. I am fascinated by the person they are becoming. Link is the same person they always were – and also a completely new creation. Most days I wake up in the morning and say to myself, “How cool is that?!”

This post is for everyone out there who’s ever done a parenting about-face because of who their child really is.