If you are not afraid of my black cat, you should be – she will bite and scratch!

Happy Thanksgiving, Canada! It is one of my favourite weekends of the year.

Today I was thinking about superstitions – when I first heard about them, and how they’ve affected me. I expect my very first exposure was through traditional rhymes like, “Red sky in the morning; sailor’s warning. Red sky at night, sailor’s delight” (or shepherd’s, in some places). But I would guess that weather lore passed down through oral tradition may have more truth to it than other superstitions.

I was very puzzled as a child when my grandmother would stop suddenly and refuse to do something: walk upstairs at the same time someone was walking down, or pass under a ladder. There was no explanation: they were just not done because they “felt wrong.” Of course, one can guess that narrow stairs and brittle ladders (with paint cans above) were not to be messed with, and linked to safety rules! Even the seven years of bad luck following a broken mirror could be understood that way, although a harsh penalty for broken glass. But I remember the beautiful dresser sets that women once had, and I would have hated to break one, too. 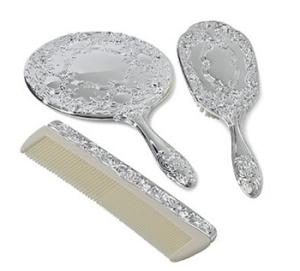 I am sure I spent many hours looking for 4-leaf clovers when I was a kid. But some good luck charms were so odd: you could actually buy a Lucky Rabbit’s Foot key chain. Not lucky for the rabbit, we used to joke. Ugh!

Children are always asked what their favourite colour is, and soon they surmise they should have a favourite number. Before you know it, most kids build routines around their favourite things: every morning they have a slice of toast cut diagonally with the crusts trimmed off, and a drink from a Red Cup. Their day seems to go all wrong if they break the tradition.

Childhood is such a funny time. It is hard to distinguish among superstitions, family and religious traditions, the mysteries and wonders of the world, courtesy and social norms.

This is the least sketchy photo I could find to illustrate my point. I am sure you could find more explicit ones with very little effort, not that I would know!

My childhood was enlivened by Catholic gestures: my parents crossed themselves when driving by a Catholic church, or when an ambulance went by. We could light a votive candle to pray for someone at church. A rosary was a desirable gift. But having a painting of the Sacred (pierced and bleeding) Heart or a gory crucifix in the public areas of your home was deemed to be going too far!

Even now, as a firm supporter of science and reason, I may have given up various superstitions and religious practices, but I have probably just replaced them with rituals and routines that I find comforting. I pay attention to the clock and do a lot of things at the same time each day. I like symmetry (or planned asymmetry) and I am inclined to straighten things. I “prefer” even numbers to odd. I double check that I’ve locked the door of the house when I leave it, and that I have my keys before I close the car door. I follow old rules of behaviour like opening a door for someone and saying, “After you.” I take my shoes off in someone else’s house even when they insist I can keep them on. I love looking at the night sky to find Cassiopeia or maybe a ring around the moon. I have coins and pieces of jewellery that I’ve had since I was 10.

Who is to say what is ritual or routine, what is custom or tradition, what is courtesy, what is belief, what is superstition? Who can even say if we do these things to please others or for ourselves?

Goodbye! See you in 15 minutes after your break! (Photo: resources.dice.com)

At work, there are two old superstitions that trip me up. First, my coworkers are about half-and-half as to whether they say “Bless you/Gesundheit” when someone sneezes, or they say nothing. For those who do, they tend to be somewhat offended when others don’t say it to them. So it is a complicated little dance unless you choose to ignore it and do your own thing! Next, some staff, when they take note of something positive, like “No one has been off sick lately,” they suddenly get all nervous and say “Knock on wood!” (and may actually knock on something wood) and become very concerned that their luck will change or that they have already brought down bad luck by saying it. More in the courtesy arena, some staff say Hello and See You Later every time another staff member arrives at work, goes on break, goes to lunch, goes to a meeting, returns from any of those, or leaves at the end of the day. That could be 8 times a day!

All I can say is that society and culture are very strange indeed. The things we do to belong!

As you may have guessed, I consider myself markedly non-superstitious, but (in true Exacting style), I am on the compulsive side 🙂

I’d be interested to hear if there are any superstitions that you can’t seem to shake, or any that irritate you!