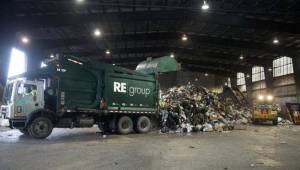 A few weeks ago I mentioned our city has a new garbage pickup system. It is getting stricter in an attempt to divert more waste from the landfill. And to force compliance. A few years ago Halifax had one of the best diversion rates, but it peaked and then slumped. We citizens were getting lazy.

At our house we challenge ourselves to create as little consumer waste as possible, although we do recycle a lot. Reducing would be better. Sometimes we only put out one garbage bag every 4-6 weeks.

Garbage day attracts crows and sea gulls that pull apart the garbage bags to get food. All food is supposed to be in the compost bin, but a lot of people are not diligent. In order to keep the pests away (considering the garbage is picked up only every 2 weeks), it is necessary to rinse food containers, too.

In the new regime, which started August 1, we all have to use clear garbage bags. Anyone who doesn’t sort their garbage properly will have it left curbside with an educational notice saying why it was rejected. One black or opaque garbage bag is allowed for privacy.

I was not confident that my neighbourhood would be up for the challenge, despite the massive promotional campaigning that occurred. So what do you think happened?

The majority of homes reduced their garbage to just one bag and put it out in a dark “privacy bag.” Of the rest, they seemed to do a damn good job! I am very proud of my city for the Big Garbage Crackdown, and proud of my neighbours who are really making an effort.

The only chronic glitch I keep seeing is that people leave caps on their pop bottles and milk jugs and so on, which isn’t allowed.

As for me, these things have been sent to garbage so far:

I suppose I have little enough that I could use a privacy bag, too, and spare everyone the sight of the cat litter! But using a clear bag is motivating – I like the idea of reducing my garbage so much that there is nothing to hide.

Anyone out there who has tried to cut back or go Zero Waste – how is it going?