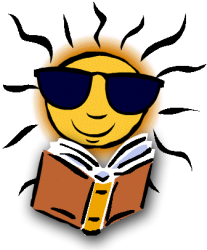 I cannot actually claim to do any beach reading or lounging-by-the-pool reading. Nevertheless, summer seems to demand a different kind of reading. Is it chick-lit, or as I call it, light reading (because men’s light reading is just called Humour)? Or is it 1000-page epics that can, at last, be read on lazy summer days when it’s too hot to cook or clean? Maybe that is what binge-watching is for.

My usual reading pattern is to read my book club titles monthly (and read ahead so I don’t have to cram), to fit in some recent bestsellers as they trickle in from my library holds list, and to allow space for whatever strikes my fancy.

June didn’t have summery weather so I am saying my summer reading started in July. The first book I read was my book club selection, All the Light We Cannot See by Anthony Doerr. I know everyone loves this book. I liked it, but didn’t love it. The book is packed with brief descriptions of sensory impressions, highlighting the experiences of the central character Marie-Laure, who is blind. The plot is exciting. I understood the trajectory of the character Werner, but I felt he was thrown under the wheels of the bus of history, as it were. I felt that the author wove in an important concept – that the times in which you live determine the outcome of your story – but Werner turned into a cog in the gearset of WW2 while Marie-Laure did not. Maybe that was the author’s point, that war takes away your individuality and turns you into just a role. Food for thought, but unsatisfying. I couldn’t help but compare All the Light to The Book Thief which I felt was much more compelling and packed more of an emotional wallop.

Every year I read a few graphic novels – some for my own interest, and some to catch up on what teens at the library are reading. In the latter category, I read the first volume of Tokyo Ghoul, by far the most popular manga and anime among the teens this year. Link warned me I wouldn’t like it because it was too violent! (Of course, Link cosplays a character from the series). In this manga series, Tokyo is inhabited by human-flesh-eating ghouls who outwardly appear to be human and live among people. Our “hero” Ken survives a ghoul attack but he has been turned into a half-ghoul who must eat human flesh to survive. He desperately wants to continue living in the human world but needs help from the ghouls to satisfy his need for human flesh. He is tortured by self-loathing but his appetites get the better of him. This is pretty strong horror stuff intended for 16+ (the anime has a Restricted rating). It is not my cuppa tea but I totally get why teens love it. The feeling that you are alone in the world, that no one understands you, that your urges are abnormal, that you are harming the ones you love…all classic adolescent themes.

I chose two light novels for the summer (so far). The Assistants by Camille Perri was a real winner. It follows the path of a typical chick-lit novel, with a cookie-cutter protagonist, an admin assistant who works for a media tycoon. It has all the usual single-office-girl tropes. However, I felt this novel was a cut above, and was also a clever social satire with a lot of heart. I am not just saying that to defend my reading of chick-lit – which needs no defense (I love a good Wendy Holden or Marion Keyes). The book starts when Tina “accidentally” pays off her student loans with company funds and is blackmailed into doing the same for a coworker. The book has themes of personal and professional ethics, guilt and loyalty, and it actually made me think. Yet at the same time, it would appeal to fans of Shopaholic or The Devil in Prada. I loved the pop culture references and only had to look up one (the name of a watch, of all things – I thought I knew watches!)

The other light read was The Rosie Effect by Graham Simsion, a follow-up to The Rosie Project. It had its moments but didn’t compare to the original (and I was irked that Rosie was especially unsympathetic).

I also read a light nonfiction, Yes, My Accent is Real by Kunal Nayyar. I like books about the experiences of people from India who immigrate to North America – I am always wowed by the ability to synthesize the two cultures (or rather, multiple cultures) which are so unalike. Mr. Nayyar focuses on his early life and introduction to acting, and the book is full of humorous tales of family and friendship. He throws in some motivational quotes. It is an endearing read. I would have liked to read about his experiences on the set of Big Bang Theory and his experiences of racism in America (and issues of racism in the show itself) but he has left himself plenty of space to write another book.

I just finished another memoir, Lab Girl by Hope Jahren. This was a fascinating look into the career of a paleobotanist (yes, really). She deeply explores the impact of gender on research funding, and also delves into the mindset of being a scientist when girls are not supposed to have that kind of brain. I also learned a ton about plants. It made me not even want to eat them any more (just kidding!) She and her colleague, Bill, have a crazy ride of  a career in Georgia, Maryland, Norway, Denmark, Nunavut and Hawaii (!?) The book was ticking along scientifically when – wham – something personal is dropped into the mix that we didn’t know about. Loved it!

I’ll end with two nonfiction books that had a big impact. I got my hands on Anti-Bias Education, a newer edition of The Anti-Bias Curriculum. This was a groundbreaking book on creating an inclusive, social justice-oriented environment for young children in preschool and nursery school. While it was intended as a guidebook for early childhood educators, I couldn’t recommend it more highly for parents, teachers, librarians, coaches, and anyone who works with children of any age. If you ever wondered what to say when a child says, “Is that man ever fat!” or “Does the brown on her skin wash off?” please read this book.

I finally read The Chairs Are Where the People Go, an entertaining book of short essays about city life. It captured the sense of being one with the teeming masses while carving out little islands of intimacy and involvement. The author, who runs workshops on improv and charades among other topics, broke his isolation when a nearby bar kept breaking the noise curfew and he had to step up and become publicly involved in a community issue. This led to him taking a stand more often and developing an advocate’s voice. I loved that he is not a black-and-white thinker. The stories were not about defeating the enemy but about finding ways to coexist. A perfect book for anyone new to city living, urban planning or community work of any kind, especially if just getting your toes wet. Inspirational! Also very personal and funny. Recommended for fans of Freakonomics.

There are 3-4 more weeks of summer so lots more reading awaits.

What have you been reading?