Ghosts of Hallowe’en Past

One of the roots of Hallowe’en is All Souls/All Saints, the night when spirits can pass through easily from one side to the other. I love the imagery of the Day of the Dead, with its marigolds and sugar skulls. Where I live, Hallowe’en trick-or-treating is a tradition connected to mummering. When my grandmother (born 1901) was a child, she would go door-to-door on New Year’s Eve and the kids would get homemade treats like fudge and toffee. When I was a kid, a few houses would still give out home made treats such as candy apples and caramel corn for Hallowe’en. That mostly ended when the media reported so many instances of unwrapped treats being tampered with – but close neighbours and our parents’ friends would still give us something special, with their name and address written on it. Most houses would give us a bag of chips or cheesies or mini chocolate bars. If a house didn’t give out treats, kids felt justified in playing a trick, like egging or toilet papering the house. You always had to have someone home on Hallowe’en night because if all the lights were out, you knew your house and yard would get plastered with something yucky to clean up! There was a brief spell of Hallowe’en getting out of hand – the occasional bonfire blocking the streets – but that is ancient history now.

With the current population shift, there just aren’t that many kids around. Neighbourhoods in my area got 200 kids at their door 20 years ago; now they get less than 50. Every year at my place, I hand out candy to about 35 kids from about age 2 to 16. Everyone used to say that Hallowe’en is for kids, but that’s certainly not the case now. I was discouraged from trick-or-treating when I was 11 because I was tall, and home owners would say, “Aren’t you getting to old for this?” as if I were taking candy away from babies 🙂 Now the biggest audience for Hallowe’en is 13 to 30 year olds – teens who love dances and parties, and students/younger adults who let loose at bars and night clubs. After that, it’s the home owners who love decorating their houses and yards with orange twinkly lights, inflatable ghosts, fake cobwebs in the trees, tombstones on the lawn and shrieking sound effects!

And you know what – I don’t think it’s all media hype and consumerism. Quite the opposite – I think it’s a night that appeals to all ages, grows with you, and celebrates creativity and cost-saving. Sure, you can buy an infinite amount of cheap plastic junk to decorate your house and yard, but you can also buy a pumpkin, make a jack-o-lantern, and get a couple of pies out of it besides! And yes, it is expected that you give candy to children, but since they get something at each house, you don’t have to give a lot. I am sure there are lots of parents who stress about buying their child an expensive costume each year, but making your own and being inventive are more prized. Now I suppose if I had a child in school I might be annoyed because each class typically has a party for Halloween, Christmas and Valentine’s Day, and every kid brings in treats for the whole class, and parents try to outdo each other with their cookies and cupcakes. Then there are additional parties at daycare, church and every other group the kids go to! So it all gets overwhelming.

That is why Hallowe’en is perfect for teenagers. It’s not a parent/family thing any more, but a social thing that teens plan with each other. I understand why teens want to continue trick-or-treating into their mid-teens, because they are usually not allowed to have house parties, and their creativity needs unleashing! At my library, we’re having a Murder Mystery Party.  Some schools have a costume day or a school dance with a costume contest. And lots of cities have an anime, comic or sci-fi convention near Hallowe’en. I just love the costumes that teens come up with. My personal favourite was when Link dressed up as Patsy from the Holy Grail, and trotted around clacking coconut halves together – it had me in stitches! The teens either have the fun of keeping their costume a secret and doing a big reveal, or planning something with friends that keeps them busy for weeks. They get to show off their skills: generating ideas, scrounging for materials, constructing props, doing hair and make-up, and most tantalizingly, trying on new identities. By 18 or 19, Hallowe’en is the most anticipated night of the year, with parties and clubbing and all manner of depravity and fun. Think about it – drunkenness AND anonymity!

I have dressed up for Hallowe’en lots of times in my adult life – sometimes for work, or a party, or doing something with Link. Here are a few pictures, old and new:

I am the “Ant” in the middle (still in high school) 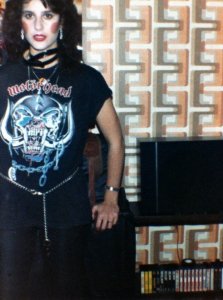 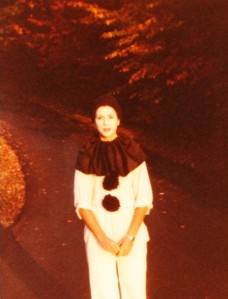 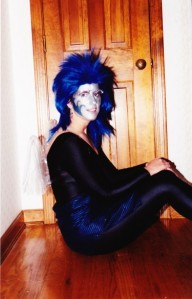 Loosely based on Aladdin Sane

And when all else fails, buy a hat!

I do have a major gripe with commercial costumes and how they contribute to gender stereotypes and the sexualization of children. I was very pleased last year when Disney stopped labelling its costumes for boys and girls, and said they were now all just for “kids.” But I still hate how male costumes are action-oriented, like pirates and vampires and doctors, while female costumes are usually “sexy pirate,” “sexy vampire” and “sexy nurse.” Often kids’ costumes are just scaled down versions of those. I cringe when I think of the Indian and Gypsy costumes we used to wear when I was a kid. Somehow ethnic stereotypes keep popping back up every Hallowe’en. Boo Hiss!

It occurs to me as I write this, how much dressing up and role-playing we do outside of Hallowe’en.  First there’s the holiday stuff – New Year’s Eve, St. Patrick’s Day, Canada Day, tacky Christmas sweaters. There are all the costumes we wear for special occasions: the graduation cap and gown, the interview suit, the bridesmaid dress. There are work uniforms: nurse, mechanic, cook. There’s sports gear: swimming, golf, hunting, roller derby. There are costumes for volunteering: has anyone ever been Brown Owl or Akela? There are, of course, expected outfits: funerals, rock concerts, recitals. And what could signify a change in your life better than a drastic haircut?

This Hallowe’en weekend I will be helping out with the Murder Mystery party, going to a Sci-Fi-themed symphony, watching the Rocky Horror Picture Show (of course) and on the day of, handing out treats. Happy Hallowe’en, everybody!