Time for my next declutter project! The earlier one is here. I was inspired by Where the Journey Takes Me to tackle my in-house hardware (she has a multi-part series of which this is the last). I don’t have a garage, and the shed has very limited space. The shed contains gardening stuff, bird feeders, ladders, camping gear and house-painting supplies. You can see it here.

When Rom moved into the house, he brought only his personal possessions from the UK, such as clothes, books and music. So, all the home maintenance and repair gear pre-dated his arrival and I have my own system for organizing it.

My home repair gear probably differs from a lot of home owners because I don’t do any major projects such as excavation, demolition, building (carpentry), roofing, masonry, landscaping, and so on. My brother has completed a lot of projects for me such as replacing a shower stall, replacing lighting fixtures, building a fence, and so on. I have paid to have bigger projects done such as replacing the skylight in the bathroom. So, I don’t have a work bench, or power tools, or lumber, or anything like that. I would have had to buy a different home to accommodate those things.

As a result, I have a smallish collection of hardware and it’s stored in the laundry room. This is my “before” picture:

I love this plastic shelf. It can hold heavy items, but I can easily push it even when it’s full, so I can clean under and around it. As you see, it’s loaded up to the ceiling!

On the top shelf, there is a battery charger and a tire inflater for the car, a portable electric heater, two portable fans, a bucket, two dish pans, and a snap-on rim for the cat litter box, which I have not found helpful to keep the litter in.

To start, I put the two car items in the car. Rom bought these when his car used to sit in the driveway for months on end, without being used. Now that he has sold his car and we have a new shared one, I don’t expect any emergencies, and the car has a roadside assistance plan. I would have brought them along if we took a road trip, but why not keep them in the car all the time?

The dish pans have been used for messy jobs like tie-dying T-shirts and re-potting plants, so I brought them out to the shed and now consider them gardening supplies. I couldn’t think of a use for the litter box attachment so it has been discarded. The rest stays. In case you are wondering why the bucket is up there, I don’t use it often (only for floor washing) and it is light-weight. Also if there are any upturned containers left around, the cats identify them as litter trays and pee in them. (TMI!)

There was a startling amount of stuff on the second and third shelves. There was no rhyme or reason to what was on each shelf. At one time I had it sorted into zip-lock bags labelled electrical, plumbing, walls, furniture and so on, but eventually the system broke down and stuff got piled on top.

I call this “electrical” but it’s mostly related to lighting.

A bunch of extension cords 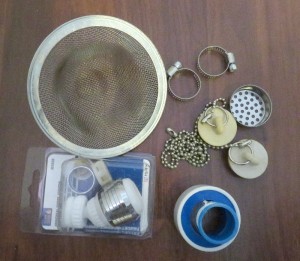 This was called “plumbing” but is mostly related to sinks and taps.

I labelled this pile “fasteners.” 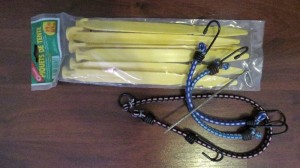 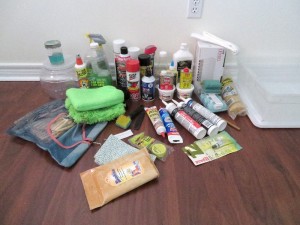 This is my Hall of Shame: dozens of toxic products that I don’t use, such as paint thinner, flea killer from a singular cat incident in 2008, Scotchguard (fabric treatment), and in the not-so-bad group, eco cleaners for the house siding and the car, to be used with the pressure washer.

On the 4th shelf is my tool box. I am rather proud of how properly stocked it is. Four items don’t fit in it: a saw (used for cutting overgrown or damaged branches from trees in the yard), a clamp (used for holding things in place that are being glued together), a tape measure, and a stud finder (which makes me giggle whenever I think of its name). I have one power tool, a cordless drill. I found a battery and charger from my previous cordless drill, which was stolen by the movers when I arrived here (or, more charitably, mistaken for their own). There are 3 sets of drill bits because every time one is lost or broken, that’s always the one I need next, so I buy a new set. Rom has two power tools, a sander and a rotary tool, and a box of sanding supplies like scrapers, sandpaper in different grits, safety glasses and face masks. I found a bunch of old smoke detectors – two expired and two that had been painted over.

I found this single-purpose item which I thought I would need again someday. Can you identify it? 🙂 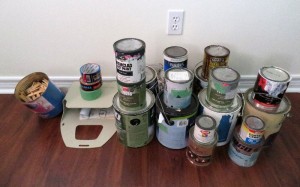 Finally, all the partial cans of paint I have used over the last 15 years were on the bottom shelf. I can’t keep them in the shed because they would freeze in the winter. There are several colours of interior paint used for Link’s room and a feature wall in the living room, as well as deck paint, floor paint and door paint, all latex. At the far left is a coffee can filled with clothes pins for the outdoor clothes line, and next to that is a container of vacuum cleaner attachments, and a few rolls of masking tape.

Whew! First I decided what could not be saved. Empty and dried up cans of paint need to be put in the trash, so that took care of 4. I can bring the rest of the unused paint to a recycling centre where it is sorted by colour and type, and turned into blended nondescript paint which is given away to anyone who needs it. I kept the right types and colours for the door step, the trim boards, and a coffee table which keeps getting scraped and nicked. I have vowed to learn more about painting so I don’t continue to over-buy. But the whole house was professionally painted last year, so I hope I won’t need to buy any more for ages!

I got rid of the vacuum attachments that don’t fit in the machine itself, and that I never, ever use. I set aside the smoke detectors to take to the hazardous waste drop-off centre, since they may have “ionizing radiation” in them. The HSW (Household Special Waste) site also gets all my old chemicals. I have decided not to keep them or attempt to use them up. Old compact fluorescent light bulbs go to HSW too, along with disposable batteries. My CFL light bulbs didn’t last as long as I hoped, and I’m now trying out LED bulbs.

I had a massive amount of nails, screws, toggle bolts, drywall anchors and so on, which were all bought for particular projects. Then I have the leftover pieces from every item of flatpack furniture I’ve ever bought! I sorted those out and will offer them to my bro since he builds and repairs things at home and at work daily (in addition to having a large garage, workshop and shed, all of which are immaculately organized). I kept things like picture hangers, shelf supports and brackets, and pads for furniture feet.

My outdoor clothes line is defunct since my nearest backyard tree is now in its path and I gave the tree priority. However, I am keeping the clothes pins since I may get an umbrella-style clothes drying rack eventually.

I combined all the small stuff into this bin, and inside, everything is grouped into labelled bags. However, I know it will still be impossible for Rom to find things, so I will be on the lookout for a drawer-system that will fit on the shelf and will hold various sizes and shapes of STUFF.

This is the last of my toxic and semi-toxic products (one set for the house and the other for the car) which I later combined into a single bin: 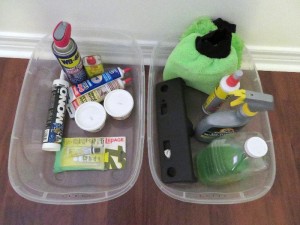 And here is how it all turned out (click to enlarge):

There’s an empty bin in the middle for my next project! Can you guess what it is?

Are any of my readers off the hook for organizing hardware because your partner has it covered? What kinds of repair and maintenance jobs do you do, and which do you outsource?