In and Out of July 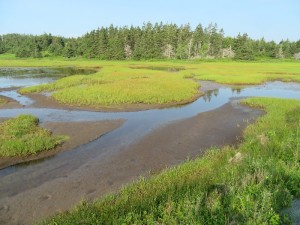 A walk at the lovely local salt marsh

July started with Canada Day festivities. Every year Rom and I go to a seaside boardwalk at lunch time, and out for a concert and fireworks in the evening. This year’s headliner was Allan Rayman. He is a folk-blues performer with a Jim Morrison-like onstage persona…interesting. 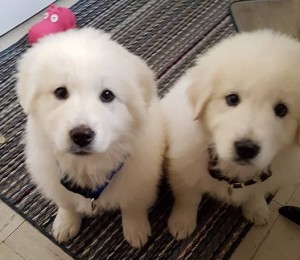 When they were 3  months – they climbed to 80 lbs at 6 months and they were only half grown!

For the middle of the day, my sister invited us to a barbecue at her fascinating new place. Her partner has created a workshop for his business in an old church, and they have moved into the “glebe house” (rectory) next door which used to house 5 priests! Their next-door neighbours are nuns (of the modern sort) and we had a good chat at the event. Meanwhile my sister is the proud owner of two Pyrenees puppies who are now 6 months old and half-grown. They are going to be big doggies!

In keeping with the family theme, my brother has a new workplace not far from where I work, so we’ve been having coffee together about once a week – nice!

For the first time in over a dozen years, I didn’t attend the local Pride Parade. It had been raining all morning and the forecast was for worsening weather, so I begged off. The parade itself did happen, but I missed it. Of course, I immediately regretted it. Living in the suburbs affects spontaneity – I was thinking, by the time I drive over there and find a parking spot and a viewing spot…just to get rained on… 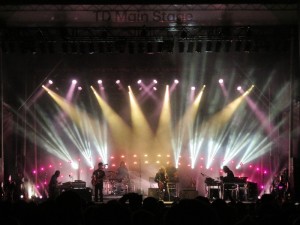 War on Drugs at JazzFest 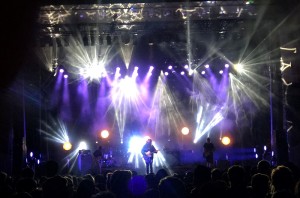 Meanwhile we attended two outdoor evening shows for the Jazz Festival, and it didn’t rain either night! Night 1, the headliner was War on Drugs (rock band). I didn’t like their first album, too rootsy/Americana for me, and I didn’t plan to attend until indie pop band Alvvays was added to the bill. They are delightful. Turns out, War on Drugs has changed their style considerably, in ways I liked, so the two acts were win/win! Night 2 was R&B up-and-comer Daniel Caesar, a smooth and relaxed performer, and opening act Charlotte Day Wilson. Both are based out of Toronto. There was a mellow audience vibe and everyone was in a good mood. Cannabis is set to become legal in October and police overlook public weed smoking now, so that may have been a factor – the “war on drugs” is over! 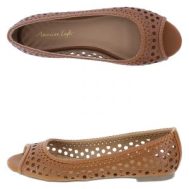 It has been a different kind of summer for me, working in an office setting instead of in the busy public library. The weather has been unusually hot and the air conditioning is always on, but not at the freezing level. I can wear short-sleeved tops and T-shirts without a summer cardigan! Oh, the novelty! I got carried away and bought two pairs of summer shoes. I have never worn sandals at work because of moving too many book carts and book bins around, so again, this feels new. I should be able to wear them until the end of September before putting them away for next year.

I tried an experiment last week. In the past year, two of my favourite clothing items, my rain coat and my winter parka, have lost their waterproofing. I have washed each a couple of times, strictly when necessary, and followed the instructions. I later found out that using detergent removes the waterproofing – it was not on the label, and I didn’t know. So I went to a sports shop and bought some wash-in waterproofing solution. So far it seems to have worked, but I have yet to put it to a strenuous test!

After a long time of making the same meals, I tried a new recipe this month, for lentil burgers. They were good but incredibly faffy – I had to use 2 pots, a frying pan, a bowl and a baking sheet, and it took 90 minutes – but at least I had a few extra for the freezer. I will try another version next time!

Rom and I have been playing with rampant consumerism. Last year he subscribed to Sprezza Box for a few months, a mail service that provides a selection of men’s fashion accessories like ties, cuff links, pocket squares and socks. He did get some nice things but lost interest quickly. Rom was looking online for other subscription box services, of which there are many. For everyone, stationery and art supplies are popular, and there are monthly boxes for candy, snacks, pet treats, tea, etc. Bath products, scents, candles and jewellery are pitched at women. Razors, hot sauce, records and movie collectibles are pitched at men. I viewed a bunch online with Rom and we couldn’t think of any we’d want monthly. I do love stationery – and candy – and coffee – but I want to pick my own!

So Rom and I made a deal. Each of us will make the other a monthly “subscription box.” Now you must understand that we both have very particular tastes, we don’t want a lot of well-meaning clutter we won’t use, and to complicate things further, Rom is not a confident gift-buyer, although he loves shopping! So we each made an Amazon wish list of stuff we wanted to receive, we shared the lists, and selected things from each other’s list to put in the “boxes.” We set a firm price limit and completed our first orders. 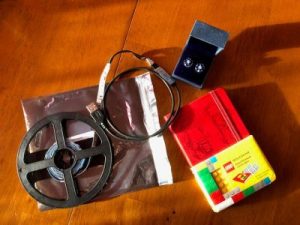 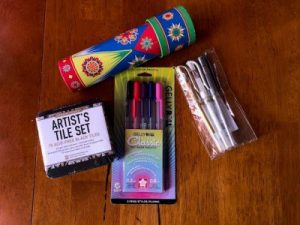 For Month 1, I bought Rom some black art paper, 2 sets of gel pens, and a kaleidoscope. He bought me a pair of earrings, a strip of USB colour-changing lights, and a Moleskine LEGO journal. We were both very pleased 😊

How was your July?