In and Out of November and December

By November, Rom and I had finished our travelling for the year and we settled in for the next two months. The weather has been unseasonably cold. I’ve spent lots of time with a book, a blanket, a cup of tea and the cats!

We went to see the Bohemian Rhapsody movie as soon as it opened. Rom and I are both Queen fans from way back and we know a lot about the band’s career and albums. We both loved the movie. To appreciate it fully, you have to keep in mind that it was produced by band member Brian May to keep Freddie Mercury and the band’s legacy alive. As such, it is PG rated, the time line was condensed, and the band’s accomplishments were highlighted. I thought it took a reasonable approach to Mercury’s sexuality and his death of AIDS. One could carp about the details, but the movie focused on the joy of music and Freddie’s outsized personality and talent.

I had stopped listening to Queen after their 8th album in 1980 (!) so I listened to their following 7 albums on Apple Music during my gym workouts in November. It was a month of Queen immersion!

Every so often, Rom chooses a course of home study, usually related to philosophy, computer science or both. Lately he has been testing a chatbot to see if it would be helpful at his workplace. One night we went to a panel discussion, Social Implications of Artificial Intelligence, at the Library. I was not at all tempted to doze off as I had feared. All the speakers had been inspired by futuristic fiction and made lots of links to literature, so I found it very engaging.

One Saturday, my sister, our friend and I did Seaside Christmas. About 25 craft fairs were held in community halls, churches and small businesses along a 50 km seaside route, and we spent the day driving from one to another, making about 10 stops and having a chowder lunch at the Acadian Museum. During the month, I had also visited the libraries in the same area – where I had attended high school in a rural harbour town. I liked renewing those connections.

My book club discussed Lawrence Hill’s The Illegal in November. For a couple of years I had given Valerie a drive to and from book club. Valerie was in her 80s and was increasingly suffering from vascular cognitive impairment. In September she decided to have a physician-assisted death. None of us had known of her plans and we were all a little in shock, despite respecting her wishes. I have been in frequent contact with her husband since, and although he thought he was prepared, he is finding it much harder than he imagined. My heart really goes out to him.

December 1 was moving day for PK! PK has an awesome new apartment not far from their workplace. Since PK came to Canada with only a few suitcases, they didn’t have much to move, so I helped by assembling new IKEA furniture. It was not nearly as difficult as the last IKEA build I did for Link!

I had a few activities at the Unitarian Church – helping to organize a fundraising drive and a soup lunch, helping out with the Christmas Bazaar (upscale yard sale) and attending the Christmas Eve/Solstice candlelight service.

I had another good day out Christmas shopping with my mom and sister. After that I completed the rest of my gift shopping in just two excursions which made me very happy. My nephew (17) was going to receive a turntable for Christmas so I had fun buying him records!

Just a few days later, I accompanied my mom for her first cataract surgery, and I stayed over to lend a hand. All is well and her second surgery is later this week. Pretty routine these days.

Can you hear the music in your head?

For the second year in a row, Rom and I went to see the Jerry Granelli Trio perform the soundtrack from A Charlie Brown Christmas, this time with my sister. I’m not sure if we’ll go every year indefinitely, but a non-rock concert in December is a nice treat. I am uneducated about jazz – correcting that would be an achievement!

Tree at the farm 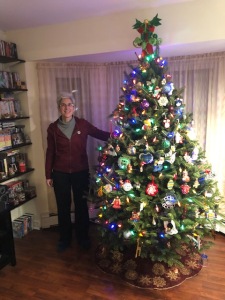 Tree in the house

For the first time, we went to a tree farm with my brother and selected our own Christmas tree to cut. Ours was 2 metres tall and would have taken 7 years to grow from seed. Here we believe that real trees can be more environmentally friendly than artificial ones. We have large tracts of land that were previously harvested for lumber and pulp. By planting trees, it fills in the gaps, provides animal habitat and produces oxygen while providing local jobs. The land used for tree farms barely makes a dent in the total land available, so there are few concerns about creating a vast monoculture. Most trees are later chipped and turned into mulch for gardens; towns and cities have a pick-up program.

Our tree was so fresh, 15 days later it still has not dropped any needles in the house and it is still sucking up several litres of water a day. We’ll probably take it down on Jan. 3 since the next tree pick-up is the following morning.

Between the 22nd and 25th, I cleaned the house, wrapped gifts, made lasagna, visited with my niece, visited with PK and Joe and had several family Christmas activities. I can’t remember any other month I spent so much time with family!

The end of December marks 7 years of blogging on An Exacting Life. I want to thank everyone who has stuck with me, especially through the posting draughts! Thanks to followers via WordPress, email, Facebook, Bloglovin, and every other venue!

I have lots of posts planned (and believe it or not, even written) for January. I am also ready to launch a second, related blog at the same site. Stay tuned!

I’d love to hear what November and December were like for you.

Have the Happiest of New Years!