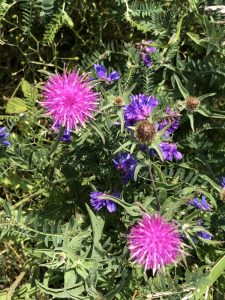 I haven’t posted the usual monthly updates on my quiet little life this year. Time for a catch-up!

I last posted about daily life in January. For January and February, we hibernated – no spending or out-of-home entertainment. It helped us save for our trip to Cuba in April, though. In March, that continued, plus we did the Food Challenge thing. By the end of March, we felt very deprived indeed. Fortunately, we had bought tickets to a March concert in December – we went to see Ria Mae. I also went skating at the speed skating oval (400m track) a few times during the season, which was a lot of fun. 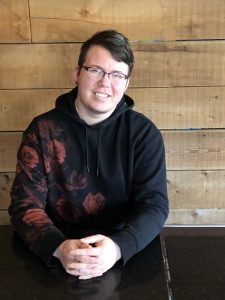 When we travelled to Cuba, our flight routed through Toronto, so we arranged to go early and visit Link. We thought that stopping in Toronto would be less expensive than planning a separate trip, but due to package-deal machinations, it wasn’t. No regrets, but we have spent from April to August recovering financially from the double trip!

While we were in Toronto, it was Link’s birthday week. We did our usual rounds of shopping and meals out. As a treat we went to the musical Dear Evan Hansen. This is a play that deals with teen mental health and suicide. It was brave and funny and touching and we all loved it. Highly recommended!

After our vacation in Cuba, we enjoyed watching the last season of Game of Thrones, after discussing our own theories about the plot and characters endlessly!

When we returned from that vacation, I was unable to boot up my computer, which had been fine before I left. We ended up having to reinstall Windows and restore everything. I did lose some files and photos, but not catastrophically. I wasn’t as meticulous with backups as I thought I was, although the automatic photo backups certainly helped. All my owned music has been merged with Apple Music for a while now. I have amped up my backups since then!

(At work, I am cautious. I back up my complete files weekly and take a copy home, just in case – even though they are on a shared drive with auto backup at work! The consequences of losing the work are just too high).

In May and June, we were awash in celebrations – Mothers Day and Fathers Day, PK’s birthday, Rom’s birthday and our 10th wedding anniversary! In the happy-and-sad category, PK’s brother departed Halifax to start his new career job in Toronto. We look forward to visiting him there!

We went out for my nephew’s 18th birthday. He started listening to vinyl records a few months ago and I bought him his first new LP to open. He was very happy. He also did some studying at our house. I coached him through the early stages of an essay on Things Fall Apart. He got an A on his own merit. High school graduation followed shortly after!

In other activities, we went to a local production of The Color Purple (musical theatre). Again, it was a heavy-hitting show, but one of the best I’ve seen – filled with both humour and hope.

We have been catching up on some live music. We went to a metal concert, Deafheaven with Baroness – a good show. At the Jazz Festival we went to a hip-hop show, Common with Shad. Throw in an extreme retro night with Def Leppard and Tesla 😛

We had fun during Pride Week at the Pride comedy show and the parade (on an uncommon 30 C July Saturday!) I put up rainbow pennants in my garden for the month and one of our neighbours did, too (and we saw some Pride flags hanging from decks and in windows). This was the first year our local stores were selling Pride gear like stickers and temporary tattoos, although I noticed that Dollarama and Walmart pointedly did not participate.

The Catholic church I attended for my growing-up years closed, on short notice. My parents have been going there for 49 years and it was the centre of their social life. Declining attendance led to operating costs being too much for the Diocese. They merged 4 parishes into one. The Diocese communicated poorly about the whole process and left most parishioners feeling bereft or angry. I did not bother to say to my parents that the Catholic Church has never been a democracy. It doesn’t help that it is selling off properties to pay legal bills and restitution from their years of perpetuating abuse. Nevertheless, it is not the congregation’s fault, and its closure will leave a real hole in people’s lives. Even I used to go there about 4 times a year to support my parents at church events they participated in.

In a surprise development, my parents got Internet! They resisted all this time because of cost. But they had an expensive cable TV and phone package. They got a promo rate for a year, with Internet included. I’ve been helping them open accounts and get started. Gently.

Ironically, we checked out our own Internet options and found we could get full cable TV added to our package for free for the same 12-month period, so now we are in TV Land again! I am enjoying zoning out to The Property Brothers and Fixer Upper. Rom is watching movie marathons like X-Men. In the 4.5 years since we last had cable TV, I didn’t miss it much, except for the big “occasion” shows like the Super Bowl and the Academy Awards.

I have a new hobby: visiting old guys. LOL! They are both in their 80s. One man from my church lives in a “nursing home” and seldom has visitors so I have stopped in a few times. He seems content to spend his days reading and receiving care. Another is a recent widower and so socially isolated, sometimes Rom and I are the only people he speaks to in a week. We go out for coffee. I like seeing them both and consider them friends. 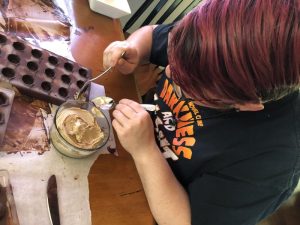 This month, Link was here and we had a good visit, seeing family every day, lots of shared meals, going to the beach, fireworks, etc. We bought craft supplies to wire-wrap rocks (i.e. beach stones). We spent a whole day making chocolates with my sister and making all our own fillings: cardamom, ginger, maple and peanut butter flavours. It certainly gave me an appreciation for chocolatiers! It was so faffy, I wouldn’t do it on my own, but now I am a trained assistant 🙂 Link visited a few hometown friends. It was great to reconnect here, since we usually meet only in Toronto.

I am still working on my project at the Library, developing the new staffing model. I never dreamed I would still be doing that work after 18 months. It turned into a monumental task. It is in its closing phases, and will be turned over to the next team soon. I am not sure what I’ll be doing next. I made a pitch for a new role I wanted, but I don’t think it’s a high priority for the organization. I have enjoyed changing roles over the years – the longest I’ve been in one position is 6.5 years. I will be placed somewhere and I’m sure whatever I do, it will be fine. I’ve learned loads of new skills in this project and I can carry them with me.

On the negative side, my current work is very much a desk job, and I really struggle to stay active and eat appropriately. I still go to the gym or swimming in the mornings, but it’s not enough to counter 8 hours of sitting. It doesn’t help that there is a snack store and a café on site. I resisted for a long time but they wore me down! I need to up my game. The weather should cool off soon, making lunch time walks more palatable again.

Our back-to-school season starts after Labour Day on September 2, so it feels like the waning days of summer, just two more weekends. The weather is usually great in September, though.

We are looking forward to an early Fall trip to the UK. This time we’ll spend a couple of days in Oxford as well as visiting Rom’s family in Sussex and returning to London for a city break.

I would love for you to comment and tell me what you’ve been up to! I am still reading all your blogs and I hope to comment more regularly again. I have noticed a strange glitch – Bloglovin only picks up every second post I write (or so the stats indicate). Thanks to everyone for subscribing through WordPress, email, Facebook, Bloglovin and however else you do it!