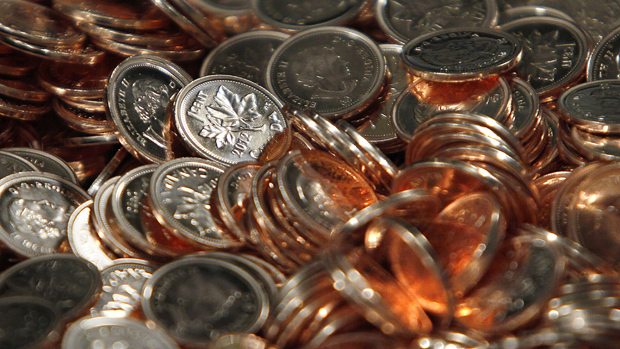 Every year I try to account for every penny I spend, but of course, some of them just seem to…escape.

I should be writing an ode to the penny because Canada is going to stop producing its 1 cent coins on February 4. Retailers will round cash transactions to the nearest 5 cents. It’s the end of an era! It’s understandable, though, since pennies cost 1.6 cents each to make. All the existing pennies will continue to circulate, so they may not be scarce for a long time yet. However, I have closely inspected my penny jar and saved a few pennies with each of our family members’ birth years on them.

About once a week, I go through my wallet, remove all the coins under 25 cents, and throw them into the penny jar. So it’s actually a penny, nickel and dime jar. I used to let Link roll the coins and cash them in for bus fares, etc. This year, since Link has left home, I decided to let the coins accrue for a whole year and donate the total to charity.

At the end of April, my nephew was doing a penny drive fund raiser, so I gave him the balance up to that point, which was $23.50. I counted up the rest yesterday and it came out to $38.00, after I scammed a few cents from Rom and Link to finish up the rolls.

Whenever I dump coins from my wallet, I record them as having gone to Misc: Cash. I have a discrepancy, though – I spent $91.41 in Misc: Cash this year. $61.50 went to the penny jar. So I was unable to account for another $29.91 over the course of the year.

One of these years I will account for every penny and the balance will be zero. Ha! Or maybe in 2013 I will be allowed to round it off 🙂

I am going to wash my hands now…