Part 1 of A Car Story is here.

Continuing on to the new mate and the new car…

I didn’t need the Aries K car I’d been left with after my first big break-up. If I’d sold it, I wouldn’t have made enough to pay off the car loan. I was well and truly stuck with it! On the other hand, since I was no longer supporting someone, I could more easily pay for it. I focused on paying down bills for a while. 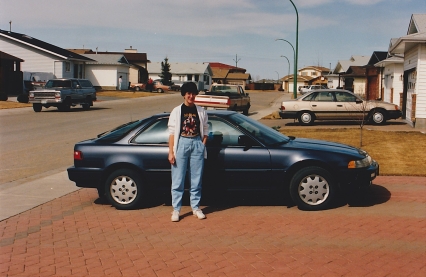 I liked shining up my Acura. And wearing my Def Leppard T-shirt.

A few months later, I met a local man, and was encouraged to put down roots in my new city. Before long, we had bought a home, sorted out new cars and got married, in that order! The new hubby, whom I shall refer to as DG, was a higher-echelon professional than me, and quite liked luxury goods. He drove a lovely Acura. I was easily persuaded to trade in the K car for an entry-level Acura Integra! The location of our new house made it necessary for each of us to have a car for commuting. So far, so good!

The Integra was a sporty car with great handling and I loved driving it, especially out on the endless prairie highways of Saskatchewan. In fact, I liked the car so much that I hand-washed it every weekend!

As I alluded to in some previous posts, it soon became evident that DG had a significant substance abuse problem. However, we “hung in there” with great hopefulness for a number of years. As soon as Link was born, it became starkly clear that the baby could not be left alone at home with dad, or go anywhere with him in his car.

Meanwhile, he was still pulling off a successful career and was transferred long-distance twice. I took the calculated risk of leaving my good job and going along. This allowed me to stay at home with Link for a while and to re-establish my career back on the east coast, closer to home. For the second of these transfers, we moved from Canada to the US. I had to sell my Integra because it didn’t meet the requirements to be imported into the US, without expensive modifications.

We purchased a large, semi-rural home in Massachusetts. Although it was only 5 miles from DG’s work place, it was also 3 miles from the nearest corner store, or any services whatsoever. He worked from 6 in the morning to 7 at night, and I was at home with a baby and no transportation. Because DG could not think clearly and was not able to be empathetic, we were often low on groceries for days at a time – he wouldn’t come home early enough with the car to go grocery shopping. Or he would come home impaired so we couldn’t go out. Although I didn’t think of it as an abusive relationship, it was controlling – he didn’t want me to drive his car and drop him off at work. In retrospect, I think he knew I would leave him due to his escalating issues, and he wanted to delay it.

Since I wasn’t working and had no credit rating in the US, I needed DG to sign for my next car loan. Stalling tactics were employed and I was at home without a vehicle for over 6 months. You can guess what happened next. I promptly went out and got a full-time job and got my ducks in a row. We separated shortly thereafter.

The mini-van, with little Link in the back

I bought a mini-van. They were all the rage and that was just “what moms did.” I wanted to be able to drive my family around when they came to visit, and to take long road trips to see them. It was certainly a safe vehicle for that. It likely saved my life once when a car made a quick left turn in front of me and I “T-boned” it. The heftiness of the mini-van worked in my favour. On the other hand, I didn’t feel good about the damage it did to the offender’s small car.

If you’ve read some of my previous financial posts, you know that DG died suddenly of an overdose. Despite all of our trials and tribulations, I had sincerely hoped he would get healthy again and be a good dad even while we led separate lives.

I stayed put in the US to give Link and me some continuity while I made future plans. Two years later, we packed up the mini-van and transported ourselves and our two cats back to Nova Scotia.

I kept the mini-van for its entire life span. When it gave out, I looked forward to buying a small commuter car. I was no longer going on road trips or hauling family around since I lived near them. I bought a Suzuki Aerio All Wheel Drive hatchback, which was more like a small station wagon. I hoped the Aerio would last me 10 years. Unfortunately, because of poor repair decisions by the dealership, it only held out for 7 years.

The Suzuki AWD, earning its keep in the snow

It was wonderful to have a small car I could park anywhere, and it was far cheaper to fill up, too. That Windstar van had a 98 litre gas tank!! I hadn’t tried an AWD vehicle before and it tested out well in the snow and ice. Link learned to drive in this car and I felt confident having a teenager out on the road with it – well, as much as one can feel confident in that situation!

Oops, no pix of my current car, but it’s one of these. Full circle from Honda Civic hatchback! Photo: zibe.com

This past year when the Suzuki was done for, I didn’t need a family-sized car any more, and I wanted something more enviro-friendly. I took a pass on another AWD. They are much heavier than regular cars and use more fuel whether the AWD is engaged or not. I chose my current car, a Nissan Versa, because of its energy-efficient transmission, small size and roomy interior. (Does that sound like a paid endorsement? LOL!) I put snow tires on it, and it has been handling great. I climb some serious hills on my way to work each day! Now I am hoping the Versa will last me 10 years.

My city, Halifax. I drive up these hills every day in winter! Photo credit: spacing.ca/atlantic/2011/10/11/

When Rom moved here, he intended to run his own business, and bought himself a car right away. As it turned out, he got a full-time job with an employer, and our workplaces are close together. So I drive him to work every day and take advantage of the free parking at the library. Rom doesn’t really need a car any more. He can sell his if he likes – I will be hanging on to mine!

Now that you’ve heard my detailed car history, you know two things about me:

Do you have an emotional connection to cars or driving?