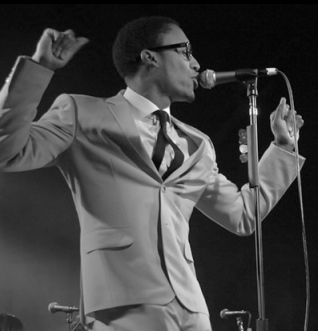 When it comes to being musical, I believe I am thoroughly average. How about you?

This is my musical history:

My mom identifies as being non-musical. However, she saw Johnny Cash in 1958 so she has good taste! My dad takes every opportunity to sing. Mom read stories to us kids every night, and Dad sang us songs from his large repertoire. Dad had a record player from a young age and spent money on records, and later, hi-fi reel-to-reel tapes, which was cutting edge in his day! However, neither of my parents, nor anyone in their families, played a musical instrument.

When I was little, my musical exposure outside of home was church hymns and occasional community events that included a concert. Being a child of the 60s and 70s, I can actually remember going to family sing-alongs where we’d sing songs like If I Had a Hammer and Blowin’ in the Wind! (Those are old folkie tunes, for those who don’t know!) 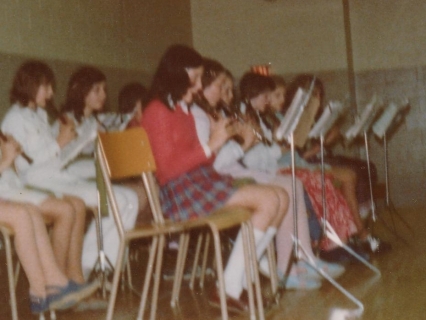 We had music as a subject in school – we learned songs, sang in the school choir, and participated in school concerts. Starting at age 9, kids could opt to learn to play the recorder, and the next year, start on ukulele. I took recorder for 2 years and I must say, that is how I learned to read music and I haven’t forgotten it.

Unfortunately, that is as far as my musical education ever went. Fast forward to age 16, and I took lessons on the acoustic guitar for 6 months. Living in a rural area, the only teacher available taught a finger-picking style that wasn’t to my taste. I soon lost interest, but not before figuring out how to pick out the melody lines of my favourite rock songs note-for-note! I never learned to play a single chord, which leaves me useless when it comes to strumming at the campfire.

So, I channelled all of my musical energy into being a music fan instead of a musician. From age 13 onward, I was obsessed with listening to music, starting with pop and moving on to rock within the first two years. Yes, I do have a soft spot for ABBA and the Bee Gees!

All of my teen years were completely consumed with reading music magazines, browsing record stores, buying albums, listening to music and going to concerts. I was fabulously lucky to have lived through the dawning of classic rock, prog rock, punk, metal, glam, new wave and post-punk. And although I was an adult when grunge and techno came along, I was still thrilled by them! Plus, there was all of musical history to draw on. My parents had liked rock n’ roll and the crooners; my aunts introduced me to what my parents called “acid rock” (LOL!) and I educated myself about the Beatles and the Stones, Led Zeppelin and the Doors and Janis Joplin and (later), my idol, Patti Smith.

I do have one regret. I spent many, many years dating musicians and watching them practice for endless hours. If I had spent even a tenth of that time learning an instrument instead of being a hanger-on, I’d be a master by now!

So can you guess that I turned into a witchy mom who forced music lessons and endless hours of practice on my kid? Well, I hope not. I signed Link up for recorder lessons at age 6, only to find out that the schools still offer it at age 8, so Link got a double dose!

Link wanted to play violin, and our local schools offer free lessons through my very own tax dollars (Yay, Dartmouth All City Music Program!) So Link took group lessons for 6 years, and added flute when it came time to choose a school band instrument. I thought that the twice-weekly lessons and additional concert practices were enough, so I didn’t push practicing at home, but some did happen spontaneously. Link ended up with much better formal music knowledge than I have, and better exposure to classical music as well.

In the past few years I took out Link’s old recorder and re-learned how to play it; I even upgraded to a maple one and learned a few songs – my very favourite to play is the Irish ballad “Star of the County Down”… because I can!

When I really work it, I can sound like Sarah Harmer for brief periods 🙂

I am not sure how I fare as a singer. Because I worked as a children’s librarian, I have actually had to sing in public at story times. After many years, I finally got to the point where if someone asks me how a song goes, I will sing a bit of it! I think my voice is quite acceptable but within a very narrow alto range. Of course I sing in the car, etc, but I know my limits. I belt out Motown hits in private!

My life and my home have always been filled with music – if not making it, then listening to it. I am still a rabid music fan and spend many, many hours reading up on new bands, playing their songs and videos, and collecting music in various formats. While I like all types of rock music, I am partial to indie these days – or bands that used to be indie before they sold out, LOL! And as you know, I go to as many rock concerts as possible.

Music has been an obsession and a joy for me for decades.

How musical are you?

Tags: Am I Series

Leave a Reply to Laura / No More Spending Cancel reply