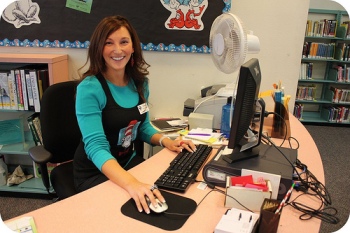 Working as a librarian! (Photo: library.escondido.org)

Not at all a bad trade-off!

When I turned 18, I could vote and attend R-rated movies. When I turned 19, I could sign a legally binding contract, go to night clubs, and drink alcohol. When I was 25 I could rent a car!

Obviously we don’t need a mortgage or a child to prove we’re adults. What made you feel you were finally grown up, or that you had “made it” as an adult?

I lived at my parents’ home throughout university – for two degrees – and didn’t live on my own until I was 23. (Most kids in Canada don’t “go away” to college.) So when I left home, moved across the country for my first full-time job, moved in with my boyfriend and signed a lease, you would think I felt grown-up. To the contrary, I felt like I was play-acting. I was youthful-looking and most people assumed I was a teenager. I didn’t appreciate that until I was over 30! In my job, I was the newbie. Because of my qualifications, I thought I knew everything, and it took me two years to develop some humility. During those two years, I felt grown up when I got my first credit card, but I felt like a child when I spent myself into debt and had to ask my family for a bailout.

Well, there is nothing like an early divorce to make one feel grown-up. Despite having received a promotion at work, it was my first taste of adult failure. It made me feel separate from my peers, many of whom were just setting up households or getting married. Yet in a way, I got let off the hook. Not having children or pension plans yet, I had a clean break, except for paying off that dreaded credit card by myself, which I considered the price of freedom.

After that I followed the usual trajectory of (re)marriage, buying a house, and having a child, with a management job thrown into the mix. I was the junior manager at work, and was even seen as a young parent, which gave me a laugh because I was almost 30 then! I suppose those were the days when one’s adolescence didn’t yet last to age 29 as it so often does now (sorry, younger readers, I don’t mean you!)

I realized I was juggling work, home, a child, and finances with some level of competence. I no longer depended on anyone for bailouts, and I was even able to be helpful to others at times. My relationship with my parents developed a more even footing, and I occasionally spent time on community efforts or professional associations. So yes, I was an adult now!

Two things had the biggest impact:

Failure. Making great big grown up mistakes and living with the consequences.

Competence over time. On the “fake it till you make it” plan. Repeatedly taking on adult responsibilities and gradually growing into them until they felt comfortable – sometimes years later.

Teens look forward to being adults because of the independence, and dread it because of the responsibility. They are right, but what they can’t see are the rewards of assuming that responsibility. They think it will be a crushing burden. Occasionally it is. But the joys of managing your own life and accepting the outcome are also great! It’s just like being a two-year-old and saying, “I did it all by myself!” Of course, you also gain the wisdom to know you’ve never done anything completely by yourself. The web of supportive people in your life share the credit: your partner and parents and supervisor and mentor and BFFs.

Here is my list of what made me feel most grown up:

I often feel bad for Link who is almost 21. What a difficult time of life! I would not be 21 again for all the money in the world.

To put you in the right frame of mind, Canadian readers of a certain age might remember this song: