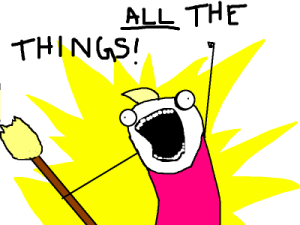 Adapted from the clever Allie Brosh. Yes, this image has an actual source! It is: http://hyperboleandahalf.blogspot.ca/2010/06/this-is-why-ill-never-be-adult.html

Are you a completist? Do you collect everything in a series? Watch whole seasons of TV shows? Read every book by an author?

I’m more of a dabbler, but there are times I just need ALL of them:

I try to keep my consumer urges in check but sometimes they get the best of me.

What’s your thing? Every colour of a nail polish? Every issue of Hello for the past 5 years? Every episode of the last 4 Dr. Whos? Are you trying every flavour of Lindt chocolate bar? What do have all of, or read or watch all of?