10 Books that Affected Me

The Asian Pear recently tagged me to participate in 10 Books That Affected Me. I am happy to join in! Books that had a big impact on me are not necessarily the same as my favourite books – that would be a whole other post. I liked thinking about this topic. Books have had a huge influence on me! I’m sure I’ve forgotten some, but here are 10 that mattered (in roughly chronological order):

I think my family had this Wonder Book edition

Mother Goose. Through sing-song rhymes told over and over, I learned about rhythm and rhyme, and developed a love of language. I also learned that all of humanity is a foolish, pitiful, laughable lot – no matter who you are or what your station. Not a bad lesson to learn at age 2!

Little Women by Louisa May Alcott. I skipped picture books and borrowed this from the library when I was 6. I loved it until The Tragic Event happened and I ran crying to my mother: why did the author write it that way? I re-read it when I was 11 and understood the plot better, but I came away thinking that authors are wily creatures who have our lives in their hands.

Diary of a Young Girl by Anne Frank. I knew nothing about this book when I picked it up at age 12. I was floored by the ending. This time it wasn’t the author I was questioning, it was the universe and God. How could such things be allowed to happen?  It was the beginning of my education about injustice in the world. 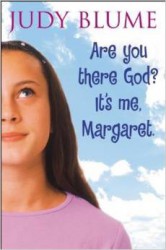 Are You There, God? It’s Me, Margaret by Judy Blume. Very popular in its day, it was a reassuring novel about puberty for girls. Religious questioning also featured heavily, which was right up my alley.

Girls Are Equal, Too by Dale Carlson. This book introduced me to feminism when I was 10. When I was growing up, only boys were newspaper carriers or altar servers, which seemed like important jobs to me at the time. Girls babysat. Boy Scouts made lean-tos and went winter camping; Girl Guides stayed in a summer lodge. Men and boys watched sports after holiday dinners while women did the dishes. This book raised my consciousness and literally changed my life. I am sure it is laughably dated now, but I just saw it was rewritten in 1998 and is available full-text on Google Books. I read the first 4 pages and shouted, “Yes!”

The Outsider (L’Etranger) by Albert Camus. The amorality of the character in this book made me squeamish, and it spurred me on to be a better person. Even if life had no intrinsic meaning, there was no justification for a self-centred existence. You had to make your own meaning. A good lesson for age 17.

Babel (a poetry/lyric collection) by Patti Smith. Patti Smith’s voice came roaring into my life that same year. She stomped all over the line between the sacred and the profane. I posted her lines on my wall:

What more perfect words for timeless youth! And I am sure I researched every literary and historical figure she ever mentioned.

The Road Less Traveled by M. Scott Peck. This was my self-help Bible for about 10 years. It stated that the point of life was personal growth. You should always strive to be your best self, and attract others who support you on that journey (while you respect and support theirs). When I re-read the book now, I find it trite. But I can’t underestimate what a source of strength it was for me then.

Material World by Peter Menzel. This is the big photo book that depicted families from around the world in front of their homes, surrounded by everything they owned. It drew attention to materialism 15 years before minimalism enjoyed a resurgence (after the latest recession). It opened my eyes to the accumulation of Stuff. 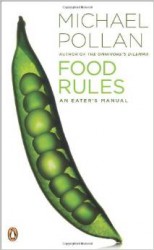 Food Rules by Michael Pollan. I am not a food purist. My own rules are pretty liberal. But I just love how Michael Pollan distilled Real Food and Clean Eating into a series of little axioms for living: “Eat food. Mostly plants.” “Do all your eating at a table.” “Avoid foods that are pretending to be something they are not.” “Sweeten and salt your food yourself.” He writes about food as if it is healthy and meant to nourish you. What?!

I could go on and on…I could list The Complete Works of Shakespeare and The Bible and The Oxford English Dictionary. But I’ll stop now. You know that books open minds and change lives!