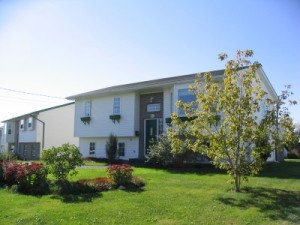 My house is not decorated and it never will be.

No one has ever come to my house and said, “It’s beautiful” or “I love what you did with it.” Guests have never focused on a feature or a colour, and I’ve never developed a style like “French Country” or “Mid Century Modern.” I have read decor magazines for years and I could probably name every home trend for the past three decades. I’ve just never adopted any of them. I bet you’re thinking that my house is actually decorated, but it is just an eclectic, personal blend of styles. Nope! It just isn’t.

How did this happen? How could I have lived on my own for over 25 years and not developed a look for my home?

When I left my parents’ home I drove 2700 miles in a panel van to bring some hand-me-down furniture to my 500 sq ft apartment. I bought some furniture and window coverings from the previous tenant. When I could afford it, I bought stuff from IKEA. But I was more concerned with creature comforts – a bed and a TV! I wasn’t able to afford anything new for my next two apartments – it was all I could do to afford a work wardrobe and the occasional trip across the country, back home. I spent any extra money on things to do, like craft supplies, or renting movies.

My first house was a like-new suburban split level with off-white walls and beige carpet. The existing appliances were perfectly OK. My white IKEA flat-pack furniture looked fine so it stayed. With the addition of a sofa, chair, and coffee table, I had everything I needed! I admit I did aspire to creating a “southwest” look back then, but since I didn’t buy anything, the style didn’t evolve. Money was spent on cars and a barbecue, and a couple of pesky weddings 🙂 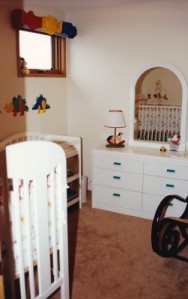 As decorated as we got!

Baby Link actually got a fully decorated room, in primary colours. I loved it. I didn’t know the gender of my baby (still don’t, LOL!) and I got some flack for not changing it over to pink when Link was born. I claim victory on that one!

My next house needed neutralizing. It had garish wallpaper and carpet. Much energy was spent on getting it back to a blank box state, like the previous house. It ended up being sold within a year. 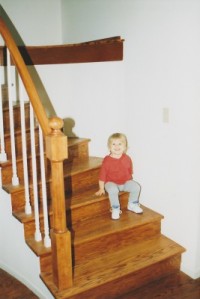 Stairway niche that begged to be decorated

House 3 was a large colonial style. I didn’t have enough furniture to fill it, and left a couple of rooms empty. It was a very attractive house, which demanded decorating. But I always felt like I was clattering around in that big house. So that Link and I weren’t isolated from each other, we ate in the eat-in kitchen and turned the adjoining, seldom-used dining room into a work space/office. Half of the nearby living room became a play space. There were so many bathrooms that Link had their own, and I bought some kid-friendly pieces for it, like a “fish themed” shower curtain. I had an A-Ha moment in that house. It had a lovely curved wooden staircase. Halfway up was a nook that was crying out for a sculpture about three feet tall. Maybe a vase with curly twigs in it? I shook my head and decided that no, I was not going to spend money on a decorative object that was bought only to fill the space. Instead Link got a trike and a sandbox. Score!

House 4 was a special favourite of mine because I was able to afford it on my salary alone, and it helped me feel independent. It was comfortably scaled at 1200 sq ft. I successfully ignored the inoffensive wallpaper. It had vintage wood floors. In keeping with the cozy look, I invested in a farm house wood table and chairs. It was a sturdy, homely “eat meals and do your homework” table which I still use today.

All of our stuff accompanied us back to Canada where we rented a similar house for two years.

Now here I am in House #6 and it has been 10 years! Is it my forever home? I’ll be honest. I don’t believe in such things. Jobs come and go, you need to be near your parents or your kids, or you need to change schools, or you get a dog and a yard, or your property is suddenly on a flight path…you move when you need to move.

That being said, 10 years feels pretty permanent to me! I expect to be here another 10-20, so I am not afraid to put down roots. But I haven’t decorated the house. It’s not because I’m afraid I’ll have to move. I’ve just become accustomed to making do with what I have. The rooms of my house are not aggressively bad looking. They are just serviceable. 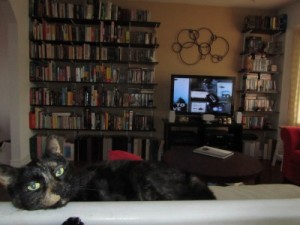 When I moved in, the house was 7 years old and still had its original thin coat of builder’s paint. It is now crying out for a proper paint job and I look forward to doing that. In off-white, of course! I do have one feature wall. I painted the living room end wall in in a colour called Pyramid which is a gold/ochre/tan. Link’s old room is a rather gloomy teenage cave that needs to be put right. I had all the flooring in the house replaced, from cat-unfriendly carpet to easy-clean laminate. I was mortified when I moved in and my 1990-era sofa and chair would not fit through the door and around the corner where they needed to go! So they were replaced by another pair. Otherwise, everything I own was collected over 25 years and moved 9 or 10 times.

Since Rom moved in, we have covered a wall with custom-built bookshelves, and bought 5 more book shelves for his complete library! Otherwise, we have spent our money on everything else but decorating: a power washer and a lawn mower, guitars, cameras, computers, concerts and plays and vacations. 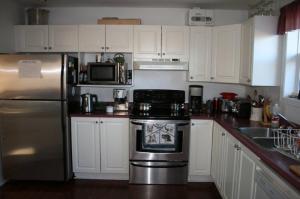 My kitchen, pink counters and all. As you can see, it is dedicated to making coffee!

Meanwhile, the house is remarkably functional and is packed with useful things. It is mildly cluttered, deeply organized and relatively clean. We have space for cooking and eating, reading and music, exercise, and sleep. We have to scramble to make room for entertaining or to have overnight guests. That could use some work.

I suppose the only truly undecorated homes have no personal touches whatsoever. I have some pictures on the walls, a few family photos, and plenty of collectibles (robot toys, candy tins, books, CDs, DVDs). But the overall look is simply “lots of storage.”

I have a few rules for my space. They are mostly adapted from my favourite household guru, Peter Walsh:

All that being said, I like nice things. My house is not dramatically random and ugly. It’s just sort of “there” doing its job, and I am happy with that. Yay shelter!

You can see more of my house here: