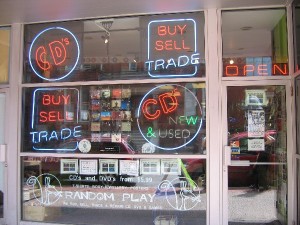 One of my old haunts (no longer around)

As a teenager, I raked in money from babysitting, and spent it on shopping. I would go to used and vintage clothing stores, used record stores, used book stores, stationery stores, and anywhere that sold interesting oddities (antiques, curiosities, and imported knick-knacks). Then I set off for university and was penniless for 8 years. During that time I only bought necessary clothes, house wares and gifts. Then I had a house and a child and I had minimal interest in buying stuff for myself, while the kidlet’s stash of stuff grew and grew! Eventually Link became a teenager and we went shopping together regularly for many years. We shopped at new and used and vintage clothing stores, used CD and DVD and book stores, flea markets, antique stores and farmer’s markets. We loved shopping! We’d make a point of going downtown once a month to do a circuit of our favourite shops and to see what was new.

About 5 years ago, that changed. I wanted to dramatically increase my savings rate. And I realized I was going to get stuck with all the “stuff” that Link had accumulated over the years, and lost interest in: the anime stuff, the punk stuff, the goth stuff, the steampunk stuff, the YA novels, the video games, the LEGO sets. Meanwhile, with the addition of used CDs, my own collection more than doubled from 200 to over 500, and I ran out of shelving space! So we stopped our shopping expeditions. We missed them.

We started the following two years by investing in a sewing machine for Link, who worked out how to modify and make clothes. Then Link’s allowance got stricter and they would spend it on fabric and notions. The time we used to spend shopping, I now spent driving Link to “fan meet-ups” for the latest media obsessions. It was a good trade-off. Link learned to be frugal, had a social life, and we still spent time talking. Meanwhile I developed a savings regime which I still follow.

Better yet, we discovered “free.” Link’s meet-ups with anime and cosplay groups were always free except for the cost of the costuming, which was their main hobby. We revived our interest in low-cost outdoor concerts and festivals: Canada Day fireworks, the Pride Parade, the Buskers Festival, the Fringe Festival, and the all-night art event Nocturne. Every now and then we’d splurge: the sci-fi/comic convention, the travelling Cirque du Soleil show, Monty Python’s Spam-a-Lot!

Well, along came Rom and then I got to do transatlantic shopping! I was infatuated with shopping in London, and although it is 22x smaller in population (and, I am sure, shopping options), he always liked shopping in Halifax, too! So I would be taking him round and making sure he knew all the best spots. However, the shopping trips were limited to our (pre-immigration) visiting time with each other and they never became part of daily life.

Somewhere along the way, though, I decided I had enough stuff. I realized that our little family of 3 was never going to need a larger house than we had now, and after Link left home, we’d be swimming in extra space. I looked at the shelves and ledges and cupboards and closets and said, “This is the most I will ever have.” It wasn’t a sorrowful realization; not at all. In fact, it was a relief. I was not going to upsize. We weren’t going to build an addition. I wasn’t going to buy bigger, newer furniture. I wasn’t going to create deluxe staging areas to show off my collections. This was it! I could relax now. I’d made it.

In fact, Rom and I only use one floor of our two-floor house, which has 800 sq ft on each level. If we ever choose to go smaller, we are already accustomed to being together (or “underfoot”) so we know it’s possible. He would just have to sell off all his guitars 🙂

This weekend, I accompanied Rom to check out the new Frank and Oak menswear store in Halifax. We hadn’t been downtown in ages and the streetscape keeps changing. I realized that what I miss isn’t buying things, but feeling connected to the vibrancy of the city. I like crowds, I like architecture and art and design, and I like seeing what types of businesses have come to town. (The Frank and Oak store is a short-term showroom to generate interest in products on their website). I like visiting new restaurants and music venues and festivals. I like continuing traditions like painting ceramics with Link at the Clay Café when they’re in town!

It’s good not to be penniless any more. I can have a meal or go to places that charge admission. But I’m aware that it’s city life I want to experience, not purchasing power. It’s fun to marvel at the design aesthetic of a new store, but it’s also fun to find all the public sculptures downtown and to share a bench with bold starlings at the waterfront and (my favourite) to roller skate in the summer at the outdoor speed-skating track. The sense of wonder I used to feel when browsing a clever shop, I now feel when I listen to a drummer in a park, or pop into an art exhibit.

It’s not completely out of my system. I have some cheats. I save shopping for clothes, gifts, and small housewares for when I travel. I enjoy bringing some London and Toronto home with me. Ultimately, it is the cities I love, though. The time I spend in them, and even the photos I take, mean more to me than what I buy.

As for “stuff,” I got a lot. I would say I’ve reduced my stuff-load by about a third in the past five years. So in the next dozen years I should be able to knock it back by the other two-thirds, right?

Not so sure about offloading the LEGO, though!