Over a year ago, I reached Tea Freedom! That is, I used up all the tea bags in the house – over 200 of them – that I had stockpiled or been gifted over the years. This included a last, miserable month of having no black tea in the house, and making myself finish up the green and herbal teas.

I am happy to report that I made the switch to loose tea, and have not accumulated any tea bags since then, and have not given in to tea madness buy purchasing 20 new kinds!

I started off with 2 loose leaf teas received as a gift, Chocolate Orange Spice (saved as an occasional treat) and Golden Monkey, which was the best quality tea I’d ever tried. I almost felt like it was too good to use! Then I decided to buy 3 varieties locally and get no more until they were used up. I chose a single-variety black tea, a cinnamon-clove black tea, and a raspberry-flavoured black tea. I found the plain black tea was not much better than supermarket tea bags, so it didn’t justify the price. The cinnamon-clove was nice, but no better than the usual chai blends. I loved the raspberry. It took me 6 months to drink up all three 50g packages (which cost $6 each). 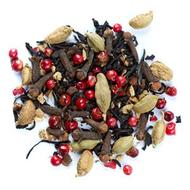 Next I went to the mall tea shop, David’s, and bought two kinds of black tea: Saigon Chai, and La La Lemon. The chai had cardamon pods and peppercorns and lots of lovely things – it was excellent. The lemon had a very strong lemon flavour and smelled wonderful. Despite being a black tea, it was too similar to lemon herbal teas. (Er, what did I expect?) They were not at all economical at almost $10 each for 56g (2 oz). For everyday black tea, I decided to go with PG Tips loose tea. It is not delicate – it is just basic – and I am 100% happy with it. I am still going strong with that box which is likely to last me a year.

Black currant en route to me

I am currently being held hostage for my next tea shipment. I ordered 3 varieties from a Canadian company online. This time I chose two flavoured black teas, black currant and orange, and a tisane that Rom and I can share (honey licorice). On Thursday, I had a notice stuck to my door saying I’d missed the courier and I should contact them for re-delivery. I did that, and the same night, the courier company called and informed me I had missed two delivery attempts. I said that was incorrect – there had only been one notice. The caller said, “It says here there were two, so that’s what I have to go by.” To get my tea, I either have to pay $10 for a “third” delivery attempt, or pick it up at their depot 15 km away. To top it off, the depot is only open Monday to Friday business hours. Grr! That had better be some good tea. I won’t order from them again as long as they use Loomis Express (and I will certainly be letting them know).

Meanwhile, Rom still buys tea bags for himself, usually chamomile and rooibos. He is very particular in that he doesn’t drink any black, green or white tea, nor does he like anything with rose hips, hibiscus or fruit flavours. Not very traditional British, eh?

Most of you know I am an affirmed coffee drinker and that tea is secondary for me. I like to wind down in the evening, brew up just one big mug of loose tea (no china cups for me) and enjoy the flavour. So loose leaf tea is here to stay. Not sure where I will be buying it, though!