Treasures in the Attic?

My parents have an attic like this with no flooring, no light, and 50 years worth of dust!

Recently my mom asked for help cleaning out her attic. To access the attic, she has to empty her bedroom closet and place a ladder inside to reach the hatch, then climb into the attic, and hand down the storage items to someone waiting below! Link and I did this in June.

Mom had always stored her Christmas decorations up there, but moved them to a more accessible location a few years ago. Everything remaining had been there at least 5 years and as long as 45 years!

There were a few old suitcases packed with papers and a few loose items, but there were at least 20 garbage bags full of clothes, toys and knick-knacks. The stuff was put up there temporarily “until the kids go through it” but then it was neglected. This was because (a.) we kids moved away, (b.) we didn’t really want that stuff in our own homes but it was comforting to know Mom had it, (c.) there were always more fun things to do when we visited, and (d.) it was so difficult to access.

We only have two months of hot weather every year, but it was enough to disintegrate the garbage bags – many of them fell apart into little bits which mingled with the contents of the bags. Items in cardboard boxes fared better. At least there were no pests in the attic insulation!

This is a “bed jacket” which was worn over a nightgown when sitting up in bed, especially when receiving visitors at the hospital

Some of the clothes and plush animals were torn, worn and stained because they had been kept for sentimental reasons, and weren’t in great condition to begin with. Everything in that category was recycled. There was a surprising amount of clothing that survived well. I gave these items a wash and they looked beautiful! I already have as many sentimental items of clothing as I want (from previous visits) so this lot was donated. I couldn’t be bothered selling it. I am hoping the charity shop will make a bit of money on selected vintage stuff. 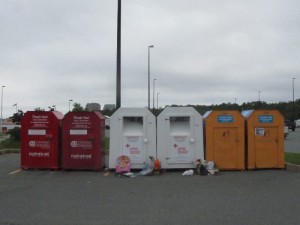 I researched the clothing stream in my community. After I throw bags of used clothing in the charity bins, it goes like this: first, it is taken to a central depot, then it is picked for high value items such as new clothes with the tags on, and vintage items in good condition. These items are sometimes sold by the charities on Kijiji or eBay to make more money. “First run” clothes are selected for the charity shops, and “second run” clothes are selected for export (by the ton) to developing countries. Stained T-shirts are set aside and sold by the pound as rags. Finally, all remaining clothes and textiles, such as torn or stained items and odd socks, are shredded for use as insulation. In the past, I had thrown out ripped and stained clothing because I thought the charities only took saleable items. I did know, however, that animal shelters take used towels and blankets.

So what did I find? Naked plastic dolls from the 1960s and 70s with their eyes permanently rolled back in their heads. Terrifying! A Barbie case with homemade doll clothes inside. Two baby cribs taken apart and used as supports for placing the suitcases and boxes on. A lot of religious artifacts, once ubiquitous in Catholic homes, but now unfashionable to display. An altar boy surplice (robe) converted into a Grim Reaper Hallowe’en costume. A bunch of men’s hats in different styles, squished beyond recognition. And a sprinkling of Christmas ornaments that had been dropped into the rafters during their annual migrations!

I took some vintage clothes home to inspect and wash. Among them I found a christening gown that looked antique and was in almost perfect condition. When I asked my mom about it, she said, “Oh, that was ours!” – meaning the one she and her siblings had worn in 1936-1940!

This bag, for delivering coins to banks, wasn’t salvageable. I guess I’d better return it to the Mint, as instructed!

I cannot deny there was a lot of crap up there. Have you seen the book or Tumblr Crap at My Parents House? – click the link for a good scare!

I imagine that either the items were in good condition when they were stored or, like most of us, my mom was blinded by sentimentality and couldn’t see the true condition of the stuff. She wasn’t wrong about that, because even the toys and clothes in the worst condition provided a rush of nostalgia.

I was beyond happy that my mom asked me to do this, because she got to tell me about all the items, who owned them and where they came from. I truly feel the pain of people who have to do this after their parents’ deaths and they either keep everything out of guilt, or chuck everything due to the absence of stories.

I fared well with my clear-out because it was confined to one space. Everything was tossed down in an hour and reviewed in a week. If I’d had to clean out the attic, the basement, the garage and the closets, I would have been overwhelmed. I probably would have “shut down” and just recycled everything.

It made me think that if something were to happen to me, Link would have no idea what a “bureau runner” is or what one does with a rosary. I would like to leave behind a curated collection!

When I left home and set up a household for myself, I took along the contents of my bedroom which included all of my mementos from my teen years. I have a good sense of what my childhood was like, based on amalgamated memories and images from family photos. But seeing the real-life artifacts was so powerful. I was left with a profound sense of how much our parents loved us and made a good life for us, and how close a family unit we were.

As much as I enjoyed looking at them, I only kept about half a dozen things. I am pretty sentimental, well into packrat territory, and I have a lot of family keepsakes already. To help me let go, I looked up a few pictures (on the Internet) of toys I used to own, and made a Pinterest board I can look at when I am consumed by retro-mania. I have decided to focus on textiles as things to keep because that’s what Link relates to most, and may want for posterity.

I was going to offer readers some motivation for clearing out their own spaces, their parents’, or their children’s. Instead I have probably inadvertently made a case for keeping everything! However, I’ll give it a try:

Advice for anyone moving out of their parent’s home

Declutter and organize personal belongings you are leaving behind:

Advice for parents (I don’t practice what I preach here, but I am making steady progress)

I actually had a Cinnamon doll, not Crissy, but I thought more of you would recognize Crissy (or Velvet)!

Advice for everybody else

In a book I read recently called You Could Live a Long Time. Are You Ready? the author noted that if we don’t downsize and declutter by age 70, we are unlikely to do it at all. We will keep putting it off until we have a crisis and are forced to sell the house. And then someone else will have to step in and do it for us.

Display or preserve them. Let the right people know what they mean to you so they can make informed decisions later. For example, heirlooms – who owned them? How did they get them? What were they used for?

Let them know. e.g. I have a Crissy doll in perfect condition and I saw one on eBay for $200!

Uh-oh. My Crissy doll is not in mint condition, in its original box. In fact, it was thrown into a plastic bag with a bunch of other toys and left in a hot attic for 45 years. It is smushed, dirty and degraded. Its value? Zero! Instead of keeping the ruined doll for sentimental reasons, enjoy looking at a picture of one online, and say to yourself, “I had one of those!” (True story)

I noted I will keep textiles for Link, such as hand-embroidered linens and a few items of clothing. Maybe your kid would like a cassette tape, a floppy disc and a CD! Better yet, identify some sentimental items that your kids have their eyes on and will actually display or use, and give them to the kids now!

What is your experience with old treasures or junk – yours, your parents’, or your kids’?