If you’ve never been to Brighton, UK, it’s a seaside resort town famous for its beach, pier, unique shopping lanes and gay culture. It’s only an hour by train from London and much closer by car from Rom’s family home. We’ve made a few day trips to Brighton, and this year, we stayed over for two nights.

We made reservations at My Brighton, a cute hotel with compact rooms, located within walking distance of everything. Have a look:

The hotel had a restaurant, bar and café, and beautiful aquariums in the lobby and bar. Plus, it was next door to the lovely modern public library! When we checked in, we were given free continental breakfasts and a mini-bar credit 🙂

The first time I saw Brighton Beach, I was shocked. There is no sand! It is all pebbles – properly known as a “shingle beach.” Yet visitors use it in the same way one would use a sand beach. Brighton Beach is technically within a bay, but it’s so broad, there is no protection from the wind.

The key attraction at the seaside is an amusement park on a pier, which dates from Victorian times and maintains its Victorian style. As you walk out on the pier, you pass by food vendors – all the UK “fun fair” foods – a huge indoor arcade, and then a large assortment of fairground rides. Which I did not ride. But I played the “2p push” arcade game (new to me) and brought some Flying Saucers to my workplace where they mystified the staff – no one knew what they were or even if they were a food – but that is debatable!

The newest attraction in Brighton is the British Airways i360 observation tower, now just one year old. The deck ascends the tower and comes back down (very slowly). We didn’t go – but I had a drink in the bar below! Brighton also has a major aquarium, the Sea Life Centre, which I am sure merits a future visit.

i360 against the skyline

The Lanes are narrow, winding pedestrian shopping alleys, packed with cafes, restaurants, sweet shops, jewellery shops, stationers and all sorts of independent stores. It is hard to get photos to capture the feel, but I found this one: 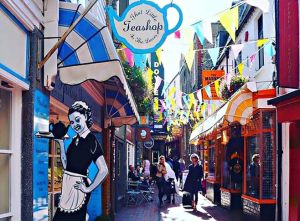 The Lanes shopping district (photo: On the Market)

There is also the North Laine (lots of vintage clothing and record shops) and a good mall with a LEGO store!

The city is known for its Regency and Victorian architecture, including the stand-out Royal Pavilion from the time of George IV:

Brighton is fantastically vegetarian and vegan friendly. We had amazing meals both at independent places and chain restaurants:

Vegetarian sampler at Terre a Terre

Off the beaten track, we went to the historic toy and model museum. It was filled with toy train layouts, toy cars and trucks, Meccano, doll houses, stuffed animals and more. I am presenting these photos to inspire sheer terror (not for children, surely!)

Send in the clowns

And one cute one!

Brighton has a more-than-lively bar scene and we have been to concerts there in the past (Bat for Lashes stands out). In June we re-watched the movie Quadrophenia, and during this stay, we stopped by a couple of movie location sites: the “Jimmy and Steph sex scene alley” and the morning breakfast café – both sites now have Quadrophenia-inspired Mod clothing and memorabilia shops!

If you are visiting London or southeast England, I can’t recommend Brighton-in-the summer more – it’s wonderful!

Have you vacationed or made day trips to seaside resorts or attractions (in any country)?