In and Out of April

Out on the town, snow, and a new Canadian… 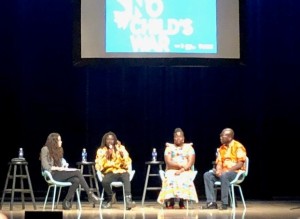 In April I had a nice mix of entertainment, going out more than usual. I’ve blogged before about events for the Child Soldier Initiative, a local charity promoting awareness of the use of child soldiers, and working to end it. What does this have to do with entertainment? Well, they had a fundraising evening featuring two former child soldiers who told their stories at a “rally style” event. One is now an inspirational music performer, and both have written books. Too many child soldier stories sound hopeless, so it was a relief to see two adults who got through it. I hope efforts continue so more kids get a happy ending to their stories.

On a completely unrelated note, Rom and I went to a concert film of Nick Cave, his latest one called A Distant Sky. I have an odd approach to Mr. Cave. I love watching him on film and reading about him, but I don’t otherwise listen to his music much: murder ballads and all that. Yet he is one of those singers and songwriters I love and respect despite their voices, like Lou Reed and Leonard Cohen! We loved the filmed concert. We won’t be travelling to see one of his live shows this year, but it’s on my future list for sure. One of the things I liked most about the concert film was how all the men in the audience (in Copenhagen) were absolutely besotted with Mr. Cave. I mentioned it at work and the guys said they all want to be him.

April 21 was Record Store Day. I am vintage enough to have bought vinyl the first time around! But Rom has started collecting LPs again this past year. He says he’ll stop when he’s bought all the records from his current list; we’ll see about that! On Record Store Day, all the independent record shops sell special edition albums (and 7”s.) I only just stopped myself from buying a very cool Courtney Barnett picture disc. I did end up buying a record, to my own surprise – it was The White Stripes Complete John Peel Sessions. I have all their other albums on CD (I was a super-fan) and this is a set of 2001 recordings which were never released until 2016, and vinyl only. How could I resist, eh?

Finally, we went to a hardcore show on a weeknight, ack! It was Protest the Hero doing a 10th anniversary tour of their album Fortress (a tour I saw with Link). Fortunately, the show started early – not knowing that, we missed the first opener. Rom and I went out for a meal after work and then to the club. It was so hot in there I ended up stripping down to a tank top. Fun show and we were home by midnight, haha!

PK and her brother

All of that pales next to the really exciting thing that happened! This has all been brewing for many months. Regular readers may remember I am in touch with a blogger from Rwanda. PK’s brother has been in university in Halifax since September. We have met up a bunch of times. PK had thought about moving to Canada, and wasn’t sure, but she applied for and received a skilled worker visa, and she was in a position to emigrate right away! After thinking about where to start life over in Canada, she decided to try Halifax first. PK’s brother and I picked her up at the airport on April 16. I was ecstatic! PK is a marketing professional from a big city. I hope I can be of some help with practical things. But if not, I look forward to just hanging out. In the meanwhile, we had a lovely night out celebrating bro’s birthday, and I am waxing rhapsodic over the Rwandan coffee I was gifted with! Here’s to the start of a friendship. (I will note that PK and her brother are originally from Uganda).

I foolishly told PK it would be early Spring and warming up to 10C; this did not happen for another two weeks, and in the meanwhile, snow was seen! To top it off, we’ve had days of torrential rain – it always rains a lot in April and May, but I swear, not like this! I actually saw a tulip today, so things may be looking up.

I have read 4 more reader-recommended books, so I will review them soon. Only 3 more to go!

How was your April?