A Day in Covid Lockdown

Today’s post is a photo journal of a Saturday. I was inspired by the Photo an Hour posts that Janet (blogger at JBistheinitial) used to do, like this one.

I decided in advance to keep busy all day so I’d have things to photograph. I assure you I’ve had many, many lazier Saturdays than this one 🙂 I didn’t want to photograph a weekday because all you’d get would be captures of my work-at-home spreadsheets and incessant video conferences!

I woke up without an alarm at 7:30. Prior to March 14, I would get up at 5 to go to the gym. My new normal is 6:30. So this was quite a lie-in! Rom had got up early and started the laundry. He was on a video call with his brother’s family in Ireland so I joined in. 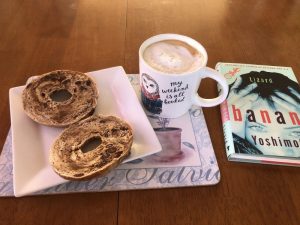 …followed by some YouTube with Rom. We discovered we’d both found the same YouTuber in different ways – Rom had found a video about a self-taught coder and I had found one about living on a budget in NYC. It turns out The Come Up is a channel about coding and budgeting – we both really like it! 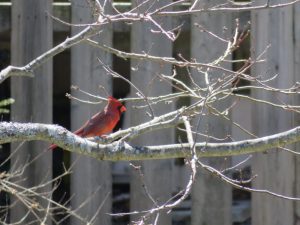 I was pleased to get a snap of our resident cardinal from the kitchen window.

Next I headed out on a long walk around the neighbourhood and listened to my favourite new podcast, You’ll Do, a BBC4 show about couples – how they met, how they get along, what they like and don’t like about each other. It’s funny and touching.

It’s sad to pass by the building where my gym is, and see it deserted. I’d like to rollerblade in the parking lot but I don’t know if it’s allowed?

You may have seen in the news that there was a horrific mass murder in Nova Scotia last week. Among the 22 victims was a police officer with ties to our local detachment 😦

But there are many things that keep me smiling, like this cat flouting the law about walking in parks and on trails! 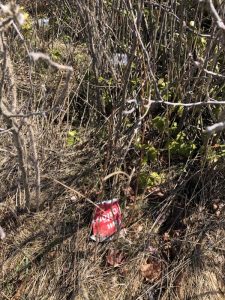 Many of you know I usually pick up litter on my walks but I’m taking a break during Covid times. I am itching to get out there with good gloves. 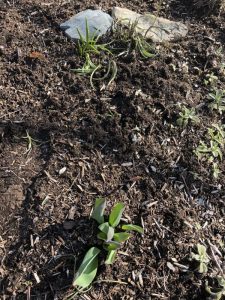 Given the temperatures, the garden is in its early stages. Here are some hints of tulips, lamb’s ear and fritillaria.

I’m back and it’s time for another breakfast! I made a cinnamon loaf this week from my mom’s recipe.

Second coffee today. You will note I am no longer using my Moka pot. I was a menace to myself and my family! Due to inattention, I boiled it dry twice, forgot to put coffee in it once, and poured coffee on my hand on another occasion, giving myself a second-degree burn (it quickly and fully healed). It was clearly not safe to keep at it! Hence the new machine.

Next I painted my toenails (you surely do not need to see that). My housework for the day was sweeping and vacuuming. I spent about an hour adding videos to my YouTube “To Watch” list for future workouts. I like vegan cooking and meal planning videos, apartment tours and make-overs, Alexa Chung, Tan France, some stand-up comedy, some music videos, etc. – mostly light viewing to distract myself when I’m on the elliptical!

Rom and I had a humble lunch of tinned vegetable soup and toast with cheese. Link is an avowed carnivore and made their own meal. After lunch, Rom napped and I read for a while. I have a container of small objects that need to be repaired (such as earrings and Christmas ornaments) so I took care of a couple of items. 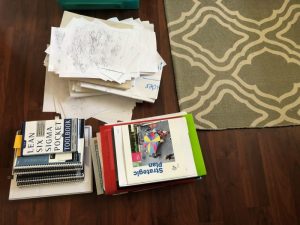 Next, a project. I had brought a drawer full of files home from work. I weeded and organized them. The big stack of loose paper is to be shredded!

Luna usually accompanies me to “work” but she was nowhere to be found, so here is a photo from a few months ago.

Another project. It had turned into a lovely day, 12C and sunny. Rom and I power-washed the vinyl siding on the shed. You might be able to see in the first photo that the damp weather causes the siding to get some mould, so it needs to be cleaned about once a year, as does the house.

Back inside for dinner and dishes. Rom and I are still splitting the cooking 50/50. My turn, so I made a Moroccan-inspired chick pea stew. 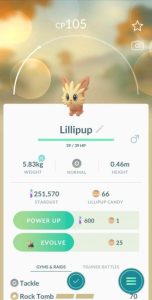 One thing that gets Link out walking is Pokemon GO. A Lillipup was found at our nearest PokeStop! A second walk for me.

Mid-evening. This past week, Rom and I finished watching the final season of Big Bang Theory. We watched the entire series in order, but over a period of several years! Amazingly, we made it to the last episode without a spoiler. Long before, we had bought the commemorative LEGO set of Big Bang Theory, so I set about making it and got halfway through – while Rom watched Laurel and Hardy! 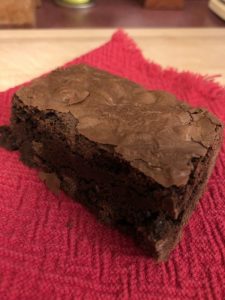 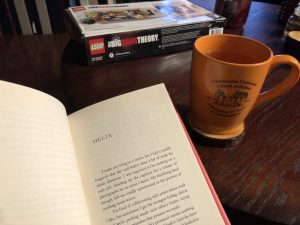 I finished up with one of Link’s most excellent brownies, a cup of tea and another story from my Banana Yoshimoto book. It was a good day!

Do you have any weekend routines or projects?