The Circle, Semi-Circle or Spiral of Life

When I was little, I wanted to grow up and get married and be a mommy. I imagined I would live near my parents and we’d all be one big happy family. I saw my older cousins living at home in their early working years, moving out only when they got married. But my parents were big on education and work, and I never doubted I’d have a career. I had grand sense of progress, that each generation would “accomplish” more than the previous one, or live a comfortable life earlier.

It was an idyllic vision and one that only appeared in my parents’ lifetime. Before that, my grandmother had brothers and sisters who left home to work in mills or “in service” and because of transportation and little time off, never saw home again. After his mother’s death, my great-grandfather worked for and lived with another family, which caused him to lose his first language and even his name. Many family members on both sides were subsistence farmers, eking out a living through homesteading, supplemented by digging clams, fishing, selling mittens or selling blueberries. Paid work was mostly seasonal – logging or landscaping.

So when my parents got office jobs and bought their own house, they were deemed to be living the high life: no seasonal, variable income! No manual labour! Their kids could go on to higher education and have access to professional careers, so their lives would be even easier.

My parents had to deal with a lot of “family life” changes that they didn’t expect. In the old days, some of the big shocks would have been your son choosing not to go into the family business, your teenage daughter getting pregnant, or a family member taking a job transfer across the country.

Among their 3 kids, my very religious parents had to face all of them leaving the church, one child moving away for 15 years (then coming back), all 3 kids “living in sin” at various times, 3 divorces (2 of them mine), 2 children born “out of wedlock,” raising a grandchild with ADHD, and finding out 2 of their grandchildren are gay, one likely transgender.

Have they been gracious about it? No. They’ve kicked and screamed and lectured and nagged. But reality set in each time, and they’ve dealt with it, saying less and less with each new development, realizing how little they have the power to change. Eventually my mom just said that she’d like to see us all happy. And they have not disowned anyone!

Finally I “got it.” My parents expected continuity from their ancestors’ lives to theirs to ours; through religion and values and shared activities and sheer proximity. And they didn’t really get it because we broke the threads.

Lately 3 of my cousins’ children have had weddings and had babies, and I am realizing just how disconnected my parents are from that culture: having children, watching them grow up and get married and have children themselves, followed by your grandchildren having children. And all of them in stable two-parent, opposite-sex parent families, how about that! 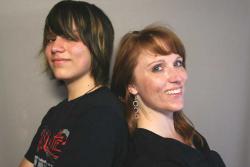 My life barely fits into that scheme: remarried for 3 years, formerly a single parent for 12 years, to one LGB/Trans kid who, so far, swears by the single life. I wouldn’t say that my life has turned out differently than I expected – I never had it mapped out. I’m super glad I got to be a mommy, though. And I made some fine choices with my education and career…one area where my judgment was less clouded.

It’s a bit scary to step outside the culture you were raised in. In my case it was baby steps. For my kid, a giant leap into queer culture. On one hand, you have rebelled against the past and you reject all the hypocrisy you found there. On the other, that leaves you to create your own future without the guidance and support of your elders. So what do you want, really? Ultimately, you want your parents and grandparents to know you as an individual, to respect your choices, and to love you unconditionally.

So for my mom to say she just wants us kids to be happy is pretty great.

But would my parents celebrate their (other) gay grandkid’s wedding? Not so sure. They’d get used to it after the fact. Ya know, sometimes broken threads can be re-tied. Tentatively. Begrudgingly, even. But somewhere down the road, way later, it doesn’t matter how you got there, only that you’re there.