My spouse Rom and I have been 95% vegetarian (although not vegan) since June 1. We made it through a 4-day Toronto vacation in June, and faced temptation again this month with a week in the UK. I suspected that London would be veg-friendly, like all big cities, but I wasn’t sure how we’d fare in the smaller towns where we visited relatives.

Here is a glimpse at some of our choices.

We took an overnight flight from Canada to the UK, departing at 11 pm and arriving at 8:30 am (both local times). Weirdly, two complimentary meals were served on board: a dinner after take-off, and a breakfast before landing. The dinner options were beef, chicken and pasta – and the pasta turned out to be fettucine alfredo. I didn’t notice or taste any bacon or ham in it. The cold breakfast was a cinnamon bun, yogurt and juice. So far, so good.

When we arrived, we were not able to check into our hotel yet, so we had another late breakfast at the airport. I was surprised that the chain restaurant there, Giraffe, had a vegetarian option for the Full English Breakfast – not only could you order it with veggie sausages, but they were made with real vegetables and not soy. For grain eaters, you could also order muesli or oatmeal. 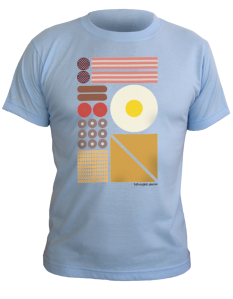 Later in the day, in London, we made a pilgrimage to the Hard Rock Cafe to see their memorabilia. They had the same menu as the other Hard Rock Cafes we visited. There are 3 vegetarian choices: a veggie burger, nachos, or macaroni and cheese. We both ordered veggie burgers. The server warned us that they tasted very meat-like and we proceeded anyway. The huge burger had roasted summer squash and a portabella cap on top! We agreed it was overkill. They could have easily just served the vegetables on the bun and skipped the burger. It occurred to me for the first time that maybe I don’t want the taste of meat any more.

The next few mornings, we had breakfast at our hotel. You could choose a hot buffet or continental buffet. We went for the continental because we would be eating out 3 meals a day and didn’t want to load up on fried foods in the morning! So we filled up on toast, granola, cereal or oatmeal, and there was lots of fresh fruit, yogurt and jam.

Our first lunch in London was a real winner. We were on a break between seeing the Natural History Museum and the Victoria and Albert. Just a block away, we ate at Le Pain Quotidien on Exhibition Road. They are a chain that focuses on quiches and open-faced sandwiches, as well as high-end bakery treats. I had a lovely vegetable tart with squash and cheese, and Rom had a frittata. More than half of their menu was vegetarian. I was pleased! 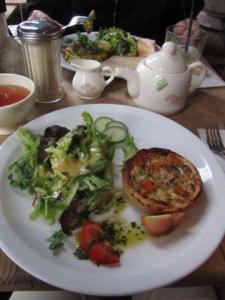 That night we were rushing out to see Wicked (the musical) so we just had pasties at the train station. These are hand-held “meat pies.” I thought for sure we wouldn’t find any vegetarian fast food other than salads from Prêt a Manger, or maybe egg or cheese sandwiches from Costa. Lo and behold, West Cornwall Pasty Co. offers at least 4 veggie options: wheatmeal vegetable, cheese and onion, cheese and mushroom, or cheese and tomato. I went for the wheatmeal veggie pasty and I found it quite good! Besides, where else but the UK can you get fast food with turnips in it! I would say swedes, but North American folks would be confounded by why Scandinavian people are put in pasties 🙂 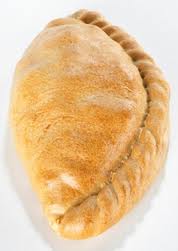 The next day we made an early start and just had lattes and muffins at Costa for breakfast. Mid-morning, we succumbed to one of those wonderful Patisserie Valerie shops, and I had a delicious lemon tart. We shopped around Covent Garden, and for lunch, we ate at Food for Thought, which is supposed to be London’s oldest vegetarian restaurant. It is a little hole-in-the-wall spot; even their website tells you: “Whilst the access down a steep flight of stairs to the service counter and the cramped conditions of the basement restaurant may not be to everyone’s liking, for others they are part of Food For Thought’s quirky charm.”

I loved my meal, which one of the few veggie meals I had in London that did not involve pastry! The menu choices change daily, but that day’s board advertised a vegetable stew, a rice-and-beans dish, two kinds of quiche, a stir fry, a soup, three salads, and loads of dessert choices. I had the Andalusian Aubergine stew which may have used a recipe like this, but had new potatoes and mushrooms, and no beans.

I ordered the combo with a taste of 3 salads: a green salad, a bean salad, and a pasta salad. Needless to say, it was way more food than needed, but so good! The only negative was that the seating area was no place to linger, so we moved on quickly. 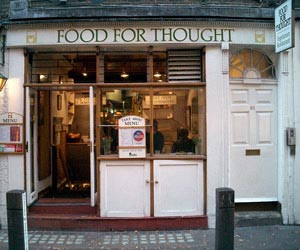 That night we got caught in a rain storm and got so wet we had to go back to our hotel early, so we ate dinner there. It was one from the Chef and Brewer chain. They had typical pub fare. When I first visited the UK in 2008, I was amazed to find that almost all pubs, no matter how small the town, are really “gastro-pubs” with sophisticated menus. Where I live, pub food is always greasy and served with French fries – things like chicken wings with BBQ sauce, breaded chicken strips, hamburgers and onion rings. In the UK, yes, you can still get fish and chips or pork pies. But here is what I ordered: “a roasted vegetable, pesto and three-cheese filo tart, served with rosemary roasted new potatoes and a mozzarella and semi-dried tomato salad.” Even the traditional dishes at pubs can appear very upscale: “FISH PIE: organic Shetland salmon, smoked haddock and king prawns in a creamy white sauce, topped with mature cheddar mash and served with seasonal vegetables.” In my experience, just about every pub offers this kind of menu, in addition to all the steaks, hamburgers and meat pies. So, no problem there. 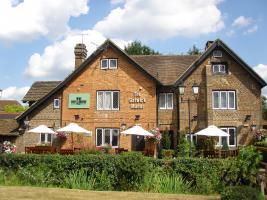 Moving out of London, and on to visiting with relatives was actually a little harder to negotiate. Our first day with family, we had breakfast and tea at home, and went out for a mid-day meal. Because we could order from a lunch menu, I had an omelette and salad.

The next day was more difficult – we went for a ride on the Bluebell Railway (an historic steam train) and didn’t have time for a sit-down meal at their restaurant. Their faster-food place only offered meat pies and sausage rolls. I am sorry to say I broke down and had candy for lunch. Luckily I was not setting an example for any children! 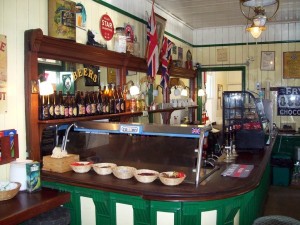 Horsted Keynes Railway Station at which I had a Mars Bar for lunch, Photo credit: bluebell-railway.co.uk

For dinner, we were served chicken and salad. It is part of our pact that we are vegetarians at home and when we choose the meals, but we will eat meat if served at someone else’s home. So we did. I could not have lasted the rest of the day with just the lettuce, cucumber and radishes! The toffee meringue did not go amiss either!

The next day I had a mozzarella, tomato and pesto panini at the shopping mall. For our last dinner in the UK, after much consideration, I decided to “treat” myself to fish and chips. It was the only non-vegetarian meal I had thought about. I was convinced it would be worth the guilt. Well, you know what? I am over it. I like chips. I liked the mushy peas. But the fish part was entirely optional and not worth the anticipation.

I learned a lot on this trip. It is entirely possible to eat vegetarian at restaurants in London and throughout the UK. However, in my case, this meant eating pastry and cheese every day and having a minimum of vegetables and grains! The continental breakfasts and home breakfasts helped to counterbalance all the unhealthy stuff we ate. I might have felt more virtuous if I had refused meat, but I didn’t feel it was worth it when visiting someone I see only once a year (or less). And finally, I am much more finished with meat, and fish, than I thought I was.

I don’t feel too deprived, though. I came home with a package of rhubarb custard candies and a package of milk chocolate Hobnobs! 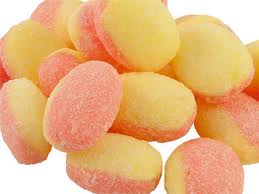