Our household became vegetarian on June 1 and it’s a part of our life now. The way we eat isn’t an experiment any more; it feels permanent.

For anyone new to the blog, we are a couple, with no kids in the house, and I have taken to calling our eating plan Vegetarian at Home.  The reasons we went veggie were:

We are not entirely opposed to eating meat, and could defend a diet based on local, free-range, organic and grass-fed meats, wild meats and fish. I have respect for people who raise, catch, butcher, and store their own meat and fish, but I don’t see myself doing it. Has anyone seen the film Animals: Friend or Food? The filmmaker made the argument that anyone who eats meat should be willing to raise and slaughter their own, so he tried it. What an eye opener! (You can watch it from the link above – depending on your country, I suppose).

We have numerous family members who do raise animals and/or hunt and fish, so we eat meat when we are invited to their homes. When we started out, we gave ourselves a “pass” so that we could eat meat at restaurants, but we only took advantage of that once before deciding we weren’t interested.

Our basic rule is that we make all our own vegetarian meals from scratch, with no meat substitutes, and we both take homemade lunches to work every day. We are not vegan – we have dairy products, eggs and honey.

Since returning from vacation at the end of August, I’ve really buckled down at work, and I’ve had less time to grocery shop and cook. The big consequence is that I ran out of time for baking bread and muffins, and I really miss them! My work includes evenings and weekends, so I can’t “catch up.” My schedule should ease up in November, so I look forward to baking again. I’d better stockpile some in the freezer so I don’t feel so deprived the next time I am swamped.

I also used to make soup several times a month, and I haven’t made any for about 6 weeks, so I am fed up with my boring lunches! I now understand better when people say they can’t possibly cook meals after work because they are “too tired.” I’ve rallied enough to make proper meals, but no extras. When we started meal planning, Rom made about 4 dinners each month. Now he does 4 meals that last for 2 nights each, so that gives me more nights off.

Breakfast – I have cereal or oatmeal with milk. Rom has English muffins or crumpets.

Snacks – I have a second breakfast when I get to work. If no homemade muffins or granola, I have toast and fruit. Rom has ice cream every night, and an extra bowl of cereal. I eat some candy most days.

Lunch – If no homemade soup and bread, I alternate among big salads with cheese and nuts, avocado and tomato sandwiches, hummus and pita bread, or rice n’ beans. I also have yogurt every day, and raw vegetables. Rom has various breads, crackers, cheese and dried fruit. 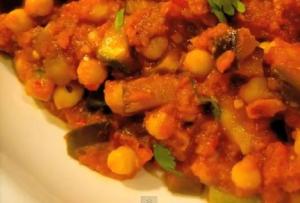 Dinners – Here’s what a couple of weeks looked like:

One dramatic change I’ve seen is that my weight has completely stabilized since I’ve been eating vegetarian. I lost a couple of pounds, and my weight stays the same virtually all the time. When I am busy I have to make a point of eating more so I don’t lose. I don’t want to fill up on chips, peanuts and sweets. But if I don’t, how much fruit, vegetables, beans and yogurt can I possibly eat in a day? Some days I’ve had enough, and I just stop eating and do something else. What a concept!

Here I’ll mention the main limitation I’ve found: despite the seeming infinite variety of vegetarian dishes, vegetarians are working from a more restricted ingredient list. Some flavours and textures are simply off-limits. I suppose I could buy “mock” versions of meat products to compensate, but I genuinely want to avoid processed foods like TVP. Every once in a while I miss a flavour that is associated with meat, such as beef bourguignon. I suppose there is mushroom bourguignon?

On the other hand, all healthy diets are restricted: from junk foods and processed foods, anyway. Eating vegetarian has made that easier for me by “forcing” me to work inside some basic food rules, giving up some choices in exchange for a better sense of well-being.

I am somewhat concerned about becoming “run down” as a result of overwork and lower protein and iron, so I am being conscientious. All vegetarian and vegan guides claim that we don’t need as much protein as we think, and that it is abundant in grains, legumes and vegetables. But I have been living on about 75% of my former protein intake, and I think it is starting to catch up with me. I am not on a low-calorie diet, either – in fact, at 2400 calories a day, I eat more than just about anyone I know!

And finally – I feel like I am living a little lighter on the earth!