Grrr, CDs Burn Me Up!

I am in the midst of an ongoing project to overhaul work and hobby space for Rom and me at home. I’ll outline the whole project later, but essentially; we are taking two crammed-full rooms and turning them into functional areas. As part of the re-purposing project, we are examining every item within, and deciding whether to keep, donate, recycle or toss.

As someone who’s had a home computer since 1992, I’ve gone through every back-up medium in the past two decades:

My first order of business was to go through all of the non-music CDs from my home office cabinet. 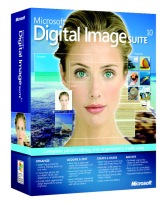 A product I loved; a version is now built in to Windows

About half were software installation disks, and the vast majority were for programs I haven’t used in years. So they were all put in the toss pile.

Some were children’s games that Link used to play years ago, on computers that are now obsolete. They all had to go. Did you know that if you try to play a very old CD game on a new computer, the new PC runs so fast that you can’t even play the game? Not so much a factor on educational games, but anything with speed involved! So unless you’ve saved an old working computer to play the old games, they’re kaput. (You can run an emulator if you are tech-savvy). Also, a lot of games previously on CD are still available now for gaming systems or on Facebook! 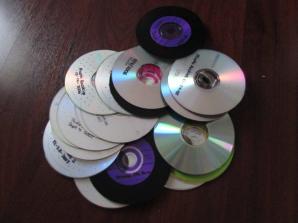 The largest pile I had was burned CDs. Almost all of them were back-ups of music, photos, personal finance data, and documents. Before having access to huge hard drives, I backed up files onto multi-disk sets regularly. I divided them into 2 piles – with and without personal content.

I have a super-crunchy shredder which will shred CDs, so I was going to put the ones with confidential data through the shredder. However, I just finished reading the book My Plastic- Free Life, and it gave me pause. All those tiny plastic fragments would be far worse for the environment than intact CDs. But I did want to protect my data. So I decided I would simply break them in half and throw them away. 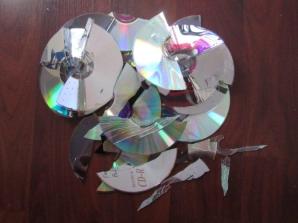 Impossible to clean up bits

Easier said than done! Some of the discs were so plasticky and flexible that I couldn’t break them. Others shattered and sent shards flying all over the room. I ended up with cuts on my hands, and had to protect my face. Then I got worried that my cats would play with the shiny pieces and eat them. I took a break and vacuumed up the room. I could see that the CD materials were separating, leaving staticky bits of plastic film everywhere, similar to Christmas tree tinsel. I ended up having to damp-mop, like you do when you’ve broken a glass in the kitchen and you need to clean up every sliver.

Finally I got a brain and became convinced there must be a better way. I checked online for options, and would you believe, every Best Buy store in Canada accepts CDs and DVDs for recycling!! Thankfully I had not destroyed them all, and had a huge stack I could still bring in for recycling. All you have to do to protect your data is to scratch or cut the CDs so they’re unreadable.

I had been absolutely convinced that CDs and DVDs were not recyclable.

After this experience, I can’t imagine ever buying another CD. I feel they are environmentally devastating!

All of my other back-up systems have become obsolete, leading me to get rid of all the old media and the equipment to go with them. (Luckily almost all electronics are recyclable). My network drive is still going strong, but when it goes, the clear answer from an environmental perspective is to use cloud storage, and budget for the cost.

I hope you will learn from my mistakes and not try to break or shred CDs!