What do you hope to inherit? (Photo: replacements.com)

Do you own a lot of heirlooms – things passed down through your family? Do you treasure them or do they weigh you down?

I don’t own anything past my grandparents’ generation. On one side of the family, the only item going back more than 3 generations was a family Bible that was given to the eldest son and then grandson.

I don’t have any living grandparents now. When my dad’s parents died, they shared the house with relatives who continued living there, so nothing was passed down. From my mom’s side, I am happy to have a few items. Most of them are things my grandmother gave me when we visited each other, not things I received after she died.

Candy dish from my grandmothers

My favourite heirloom is a covered glass dish that my grandmother kept filled with peppermints. She later gave it to me for my hair clips and such. I didn’t know until years later that she had broken the lid. My other grandmother, upon hearing about this, sent a lid from the same dish: she had one, and had broken the bottom part of hers! Most amusingly of all, in recent times, I saw identical dishes at a chain store called A Buck or Two, for two bucks! 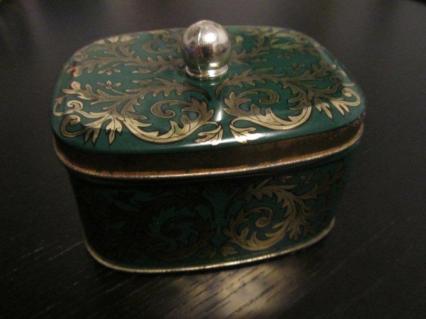 I also have a little decorated toffee tin that my grandmother threw her pennies into. She hated pennies, calling them “those deuced coppers!” and would have rejoiced at their demise this year.

A couple of years ago I decided not to keep everything with sentimental value. My grandmother had made me two crocheted blankets or “afghans,” and we had made a patchwork quilt together when I was 10. But they were all literally in rags. I could have repaired them, or saved pieces, but I decided not to. I took pictures of them and let them go.

I like other ways of remembering people, such as growing their favourite flowers or making one of their recipes.

Recently my parents renovated their basement living area and got rid of tons of belongings that had been stored there – getting musty. They commented that they wouldn’t want us kids to have to go through them someday.

I was quite affected a few years ago when a single person at work died after a long illness. Her best friend held a little estate sale and hoped that her co-workers would take home a few things to keep her memory alive. I felt sad to see her treasured Christmas tree ornaments and Star Trek novels on sale for 50c each and people pawing through them.

I am currently going through my own house, taking inventory, and decluttering as I go. I can’t help but think how unattached Link is to possessions and how little would be kept of my stuff! I certainly don’t want to attach all kinds of emotion to things I own, in the hopes of guilting Link into keeping them.

I am getting less sentimental over the years; I mentioned recently that I don’t display many photos, and I really don’t like the feeling of being stuck in the past. I’m not ruthless, but I’ve tried to take organization guru Peter Walsh’s advice to heart. To paraphrase, he always pointed out that if a sentimental item is in the back of a closet, how is it honouring anyone’s memory? Either display it or pass it on – your relatives would not want you to be burdened with it.

Except when that’s not true. There are lots of people who do, in fact, want to burden you with their stuff, and make you keep it forever, and pass it down through more generations. How do you tell your mom that you don’t want your great-grandmother’s ceramic beagle?

I’m not an extremist; I will always have sentimental items. I hope to declutter the house enough that I can display them properly. I try to place more value on experiences than on stuff. I don’t want to be one of those people/parents who is always longing for the time when their kids were babies.

Now is good! I like it here. Everything that happens to me contains echoes of my ancestors. Just a little bit of physical connection through objects is enough.

What do you keep – or have to keep? What will you make your kids keep?