Me and Mr. Jones

Lengthy post – to get back to our regularly scheduled programming sooner 🙂

Yesterday I wrote about how we planned a week-long trip to Toronto; today I’ll tell you what really happened!

We got an early-morning drive to the airport from my parents. Super-nice of them, since as I mentioned, it is 30 km each way! They also shared cat-care duties with my sister for the whole week. At the airport we found out that the plane we were supposed to fly on was not available, and a plane with 20 fewer seats had been substituted. We couldn’t get seats together for the flight despite having prepaid them, but we were relieved to be on board at all!

When we arrived at our B & B, we stored our luggage, explored the neighbourhood and found a lovely coffee shop which made Reece’s Pieces lattes – what a way to start vacation!

We had tickets to the Sparks concert that night at 11 pm (!) Link met up with us for dinner but had been very ill that day and wasn’t up for the show. It didn’t seem to be contagious so it may have been food poisoning 😦 Anyway, two of us enjoyed the food at Fresh (a vegetarian/health chain) and I plan to go back every time I’m in Toronto. I had soup and salad but I wanted to try everything! Since we had several hours between dinner and the concert, we tried to get into Snakes and Lattés, a board game café, but there was a 3-hour wait!

Rom and I really enjoyed the Sparks show. I would say it was a fan experience and anyone who attended just out of curiosity might not have “got it.” That is a thinly veiled way of saying that they are old and eccentric and it works better when you know their history!

On Day 2, Link needed to lay low so we took advantage of the time to go record and comic shopping. I don’t actually buy vinyl despite still having some at home. But I love going through used CD stores and filling in holes in my music collection. Likewise, Rom doesn’t buy many comics, but he looks for Magic the Gathering stuff and we both like geeky toys – I bought just one tiny robot! Every year I buy my dad a movie musical on DVD and they have a fantastic selection at Sunrise Records. Rom and I went back to the Hard Rock Café to ogle the guitars, costumes and other music memorabilia.

Later in the day we visited Link to see the new apartment, building and neighbourhood. Link had been living alone in a studio apartment for 2 years, so it’s a big deal to suddenly have 3 roommates! It has been a couple of months now so they’ve officially settled in. All 4 of them are into animé and other nerdy things, as well as considering themselves “queer folks.” As far as I can tell, they are not party-hearty dudes. The new place is much further from downtown but since Link is building a home-based business, it’s not an issue. I liked seeing all of Link’s latest sewing projects and just catching up on everything. Most of all, I like being able to visualize where Link lives. 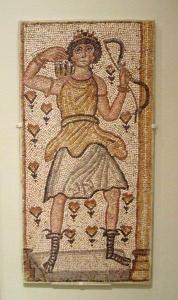 On Day 3, Link was much recovered and we made our first outing to the Royal Ontario Museum (ROM). We met up at 11 and went through the Mesopotamia exhibit. The rest of the museum had traditional exhibits like dinosaurs and animal classifications, along the lines of the Natural History Museum in London. But we loved the separate exhibit of clothing design and textiles.

Here is where our lunch scheme fell apart. The museums don’t open until 10 and they take several hours to go through – 2 hours for the main exhibit and as much time as you can spare for the rest! But you can’t come and go from the building, so we needed to have lunch in the cafeteria. The ROM had an excellent one (run by Druxy’s Deli) with all kinds of fresh and homemade foods, including vegetarian soups, stews and sandwiches. I suppose that lighter eaters could have had a muffin and got by until dinner time, but I am not of that persuasion, so we had a full meal.

When we had our fill of the museum (after seeing the exhibits on ancient Greece, Rome and Egypt), we were in the neighbourhood of Snakes and Lattés again so we played board games for a few hours. They have the largest playable board game collection anywhere, and the choice was overwhelming. We played Forbidden Desert and GemBlo (which is similar to Blokus). Because of the wait times, I would only recommend visiting the café early in the week!

We ended the day with another great meal nearby at Real Thailand. Really, I’m sure we could have eaten cheap falafels somewhere, but we were finding that in order to spend time together as a family and take a break from walking all day, we needed plenty of leisurely meals! As a result, our food budget probably doubled for the rest of the week.

Day 4 was a planned shopping day. I had offered to take Link out to buy clothes. Link knows all the best vintage spots in Kensington Market, and also loaded up on basics in Chinatown. You may already know that Link’s style is a combination of vintage, historical, steampunk and dandy. You know the joke, right: “Steampunk is what happens when Goths discover brown”? I found a rather classic-looking blue nylon boys’ jacket and a waffle vest for weekend layering.

We had two full meals out that day. Link wisely insisted we go to Chococrêpe on Queen Street West where we had savoury crêpes and high-quality dessert hot chocolates. I had a chili-cayenne dark hot chocolate with quite a bite; it was divine! They had the BEST French-café-ambience music, which was a playlist put together just for them. About 6 hours of shopping later, we had dinner at Trimurti, one of the three Indian restaurants at the beginning of Queen West. We had Sag Paneer and Veg Jalfrezie with rice and naan – mmmm! Now that I know there is one, we’ll go to their lunch buffet next time and try everything! 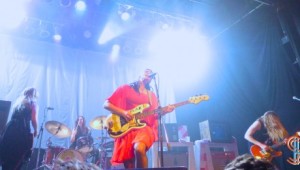 That evening was the Kate Nash concert. She has a girl-power theme going on, and is more sincere about it than, say, the Spice Girls! Her latest album was released independently and she seems determined not to coast on her earlier success. I think her target audience is probably 16-24-year-old women. We didn’t quite fit the mould, but it was a good show.

Costume from David Bowie’s Ashes to Ashes, the first music video I ever saw (1980)

On Day 5 we saw the David Bowie exhibit at the Art Gallery of Ontario. It was touring from the V&A in London. Everyone got a headset to follow the exhibit with music and interviews, and there were lots of video installations. I loved all the rare and personal photos, handwritten lyrics and music, and notebooks of ideas. But most of all I loved the costumes, of which there were more than 50. The crowds made it hard to read the info around the room and follow the audio at the same time, but by lagging back, I managed to absorb it all! Once again we had lunch at the museum and stayed on to see some of the other galleries. In the evening Link made us dinner and we watched animé, a fitting end to the day!

Day 6, we met for lunch at Vegetarian Haven. This was more of a splurge than the others, but the food was fantastic. I tried seitan for the first time. Everything was so fresh and seasoned just right. I took photos but they just look like generic stir-frys, which they were not!

Link at the Yellow Submarine Playground

In the afternoon we ventured over to the new Aquarium at the base of the CN tower. It had only opened 3 weeks ago. It is a commercial venture owed by Ripley’s, who operate other aquariums as well. I thought the exhibits might be sensationalized, but it was just as educational as any I’ve seen. It took us a full two hours to see everything, and the play areas and interactive stuff would have kept kids there for hours longer! I just love gentle floaty things like sea jellies and sea horses, especially the leafy ones. But it’s impressive to watch a giant shark or turtle swim over your head! Unless you’ve seen a lot of aquariums before, I would highly recommend it (although we heard the weekend line-ups were unbearable).

We had one disappointing meal at a British-style neighbourhood pub. Although it wasn’t a chain, the food didn’t rate against all the flavourful meals we had the rest of the week. And Toronto is so spectacularly multicultural, I looked around and noted, “There are only white people here!” (Nothing like the UK, which is also extremely multicultural). I don’t even know if Toronto has a good range of meat-and-potatoes Western-style restaurants! 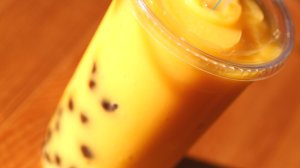 On our last day in Toronto, we had lunch at one of the Magic Oven restaurants, which are on our don’t-miss list for every visit. Rom headed off to the Reference Library for the afternoon while Link and I bussed out to the Pacific Mall in Markham. It is a giant indoor Chinese market, in the form of a modern mall divided into little glass cubes. Each store was about 12 by 20 feet, and there were 450 of them! The stores sold (overwhelmingly) iPhone cases, sunglasses, jewellery, accessories, imported snacks, and super-kawaii collectibles like Hello Kitty and Totoro. I had the best mango-lychee smoothie EVER! It is surely not a spot for serious shopping, but if you have any spare cash to part with, you can have great fun doing it, and maybe bring home a dragon or Buddha figure while you’re at it! We met up with Rom and with Link’s BF for all-you-can-eat sushi for dinner. The restaurant was not commendable but we were in good company.

If I were to do our week over again, I would have left more time for reading, napping and relaxing, but I felt we made the most of Toronto and we can always laze about and sleep at home!