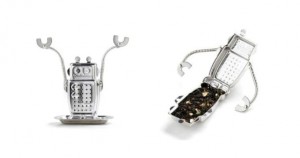 You know I have this! Photo: thinkgeek.com

Hey, I forgot to report that in July, I reached Tea Freedom! I had a whole cupboard full of tea bags, most of which I received in gift sets. In January, I vowed to use them all up. By May, I had run out of every kind of black tea. I spent July using up the green and herbal teas. One day I found two tea bags of ordinary black tea that I had brought to work and left in my desk drawer. I was overjoyed!

If you read my last tea post, you know I’m not a big fan of either green tea or fruit tisanes. I do like mint or lemon, but only as an occasional change from black tea. It was a LONG two months without what I consider “real tea”!

I had enough tea bags to use one every day from January to July, so more than 200, and that was after giving away half a dozen packages!

So now it’s my task to start over with loose leaf tea, and not go on a spending spree. I had three in the house – Golden Monkey (delicate), Orange Chocolate Spice (saved for a special treat) – both gifts from Link – and a Chai spice mix that you can add to any tea. It’s very good – has green cardamom pods in it.

I could hardly wait to visit a tea shop and make more selections of black tea. I bought small amounts of three kinds – a plain, good quality Kenyan one, a raspberry flavoured one, and a cinnamon-clove one. They are all organic fair trade, but not super-premium. My taste buds woke up when I tried the Kenyan – it is so flavourful and robust compared to good old Tetley! And the other two are lovely in the evenings by themselves.

I didn’t know until now that tea bags are usually made with the “fannings” and dust, or crushed bits left over from tea processing. But then, last year I found out that cheap ground coffee usually contains twigs and floor sweepings!

I hope I can hold off buying more, but I’m quite keen! I don’t know much about tea quality and I’m a little afraid of being a sucker and overpaying for things I think are rare or best quality, when they aren’t.

Anyone out there have tea suggestions or advice?

On a related note, have you ever had a stockpile of food you’ve worked hard to finish? It happened to me once with…sausages 🙂