Budget Review and Advice to Self 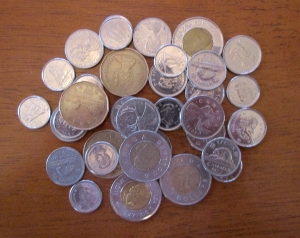 Note the lack of pennies

This year I began a new style of budgeting. Since we’re more than 10 months into the year and I can predict how the year will end, I am trying to learn some lessons early and decide how to budget for 2015.

Before this year, the way I budgeted was to estimate and pay all the regular bills monthly, but try to squeeze in the “big bills” (such as heating oil, property tax, insurance and Christmas gifts) without saving. So I would pay one of those bills, then go bare-bones for a while, then pay another big bill. I would try to work them out so they were covered by one of those “extra pay cheques” or a tax refund. I always managed, but the cash flow had peaks and valleys!

I had a “transition year” in which I used savings to pay the big bills and get stabilized. Then I switched over to my current method. It is an extremely obvious system but I’ve never had the self-discipline to try it before.

I had a huge list of bills I was saving for, some with a fixed cost:

And some where I set the savings level myself:

And my two inviolable savings pools:

That is TWELVE savings categories! Doing this completely changed my budget year because now ALL of my income is allocated in advance.

After paying groceries, heating oil, gas for the car, utilities and so on, you might think I’d have nothing left. You would be right! But since I had already saved for those occasional expenses like clothes, gifts, and concerts, there wasn’t much I needed. As a bonus, whenever I received a windfall, like one of those extra pay cheques or the tax refund, it was actually extra money!

I was accustomed to having lean months, especially after vacations or Christmas, and now I don’t, because all of my bills are distributed into equal payments. The blips are very slight. For instance, I had to buy currency for my travels this year, and both times, I “lost” over $100. But because I had saved for the trips in full, and had those extras sitting around, it was no big deal.

This month my annual “home and auto” insurance payments were due and I paid them off in full – without tapping into my TFSA. That was a good feeling. The insurance company has a payment plan but they have a surcharge for using it, and it made me very happy to avoid the fee!

I do usually overspend in December and make it up in January and February, which means no entertainment in the darkest months. According to my calculations, I’ve saved enough on a per-month basis that I can break the pattern  this year.

I liked setting aside a (virtual) envelope of money for things like clothes and birthday gifts. There are no birthdays in my family from January to March, but several in April and May. Since I had saved during the first three months of the year, I was able to do my “gifting” in the Spring with no impact. Recently I stopped buying clothes for a couple of months, but kept contributing to the Clothes Fund, so I was able to buy a much-needed new parka with no hit to the wallet.

In one pot of money, entertainment, there is actually a surplus because there haven’t been many ticketed events this year. We can choose whether to reduce the monthly amount we pay in, or attend an expensive “treat” event, or go out for a couple of upscale dinners!

Since almost every nickel of my income is accounted for now, I rarely think about splurging on big-ticket items like the new camera I bought last year, because savings always comes first. I am just hoping to clear enough next month to sneak in a Fitbit!

Admonishment to Self: What took me so long?!

A detailed outline of this style of budgeting is here.