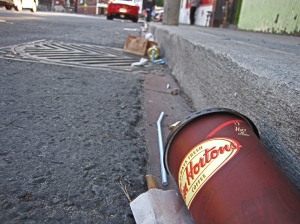 On my first visit to London, I quickly spotted a cultural difference between North America and the UK. There is much less of an eat-on-the-run mentality. Where I travelled, there were no drive-throughs for coffee or fast food. Even in areas full of people on the move, such as subway stations, most customers ordered a coffee or snack and sat down at Costa or Nero to eat it. I felt very much the exception when I ordered a take-out Flat White or muffin. Consequently, there are few to no garbage and recycling bins in public areas. Most people don’t need them, and otherwise, the expectation is that you take your food wrappers home or to your office with you.

Compare to where I live: half the people I know buy drive-through coffee shop items or fast food on a daily basis. Most are making healthier choices than they did in the past. A certain contingent would say they are too busy to prepare breakfast, so they stop on the way to work. And some are ferrying their kids to activities in the evenings, so they grab dinner on-the-go and eat in the car or at their destination. It wouldn’t be at all unusual to see a family eating a meal out of McDonald’s bags in a school corridor while waiting for their appointment at a parent-teacher meeting, for example. Correspondingly, there is an assumption that every public building has garbage and recycling bins.

After moving into my house a dozen years ago, I was distressed at the amount of litter in my neighbourhood. There is a high school almost across the street from me. Its parking lot is full every day, and the students and teachers park their cars all along my street and other nearby roads. I sussed out that while probably only 10% of the student population drives a car to school, one of the perks is that they can take their friends out for fast food at lunch time. Because of time constraints, and limited seating at the restaurants, they like to hang out in their cars, and rush back to school at the last minute.

I am sure that if I dared confront any high school student about their trail of litter, they would express surprise, and say they didn’t notice the paper cups and food wrappers falling out of their car, or they accidentally dropped them in their haste. They might say there is nowhere to put them. Or they would just say, “Oops, sorry!” and keep going. Ultimately, though, everyone expects that garbage cans will be available at the entrances to the school property, but there are none. How realistic is it that the students will place their trash in a bag inside their car, or carry it by hand into their school? Not!

After more observation, I saw that high school students were not the only source of the problem. On garbage and recycling days, homeowners have to put their garbage in clear bags and place them at the sidewalk any time after 7 pm the night before pick-up. By the time garbage is collected, it is often 2 pm. In the meanwhile, crows and gulls come along and pull the bags apart. Even though most homeowners properly use the municipal composting system, all it takes is an unwashed food wrapper to attract wildlife. The first time this happened to me, I was mortified. I cleaned up all the shreds that were strewn over my lawn, and rebagged them for the next garbage day.

My neighbours don’t always share my fastidiousness. A couple of times, I have come home to find the street covered in garbage, the homeowner refusing to acknowledge it came from their property, and just leaving it there. As in forever!

You know my problems with my absentee neighbour? (There is a vacant house next door). In mid-December, the owner visited the property briefly and put out a bag of paper recycling. I knew I wouldn’t see my neighbour again for at least 6 weeks because she only checks on her property occasionally. I could not understand why birds pulled apart her bag of paper. Realizing no one would respond to it, I stopped by to clean it up, only to realize she had thrown a bunch of stinky disposable diapers in with her paper recycling – gahh! I was tempted to call and give her a piece of my mind but it was Christmas time and she is home with a new baby and I decided to let it go. (I will speak to her about it the next time we see each other in person). But it was a good example of how the average person doesn’t think about their trash at all beyond “putting the garbage out.”

Finally, we have the dog walkers. Living in suburbia, everyone takes their dogs out for morning and evening constitutionals around the block. Happily, the owners are really good about bringing along plastic bags and cleaning up after their dogs. However, instead of bringing their poo bags home, they look for garbage cans on public property that they can throw them into. The neighbourhood has only two tiny receptacles, which are emptied by the city once a week. Lately I’ve walked by and found that the dog walkers, upon finding the little garbage bins full, will simply drop the poo bags on the ground underneath, and leave them there!

So what are the solutions? Here’s my list of “higher level” options:

Meanwhile, I am bothered about litter every time I walk to and from work, i.e., daily. I can’t let myself get eaten up with anger, but I want to do something rather than nothing. So here is what I am doing:

I have to admit that I was getting more and more like David Sedaris, who goes around picking up litter all day (while wearing his Fitbit, no less!) I knew I could never keep up with the amount of litter in my neighbourhood, due to the school, the convenience store, the skate park, and so on. I have decided on a couple of strategies that soothe my conscience but don’t run me ragged. The schools have a two-week break in December and a nine-week break in July-August. When school is out, I pick up all the litter on the perimeter of the school property on my street. The rest of the year, there are two garbage receptacles on my way to and from work. As I approach each one, I pick up bits of plastic and foil that birds are most likely to be attracted to and eat – bottle caps, candy wrappers, and so on, and drop them in the bins. I don’t pick up all the litter and carry it a kilometre to the next bin. Just that! It’s something rather than nothing.

Does litter affect you or bother you where you live? If anyone (or their city/region) has had any success dealing with litter, I’d like to hear about it.