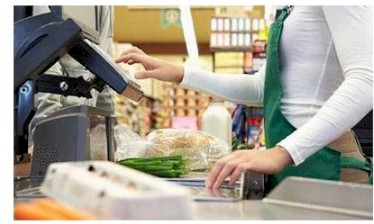 It’s time for a half-year grocery tally! Last year I added up all the food I purchased over the year – not just the cost, but how many of each item. I wanted to know what it would look like on paper to describe our grocery buying! I think I had a rose-coloured view of our grocery buying habits that didn’t match the reality.

Some background: We are a family of 2 adults. We have been eating Real Food, making meals from scratch and menu planning for over 2 years. A year ago, we decided to go vegetarian (95% of the time). We had a reduction in grocery costs when we stopped buying meat.

For the first 6 months of this year, we have spent $2373 on groceries, or $396 a month, on just food. I am happy we broke the $400 mark! Another $78 per month is needed to account for paper goods, cleaning supplies, personal care products, and cat food and litter. So the “total total” at the grocery store(s) is $474 a month.

Last year our grocery food costs were $481/month but I had included paper goods. So for a fair comparison, this year (so far) they are $412/month including paper goods. We have reduced our spending by $69/month, or 14%.

I used to do a menu plan a month at a time, and buy groceries weekly. However, I would find that sometimes we had too many leftovers and we didn’t use up all our fresh ingredients on time. (Rather than throw them out, I froze them or made soups). I think it happened because we were new at vegetarian recipes and were too keen, wanting to make new dishes several times a week! Now we have a repertoire and don’t feel the need to mix it up quite so much. My current practice is to stop by the grocery store, buy enough food for breakfasts, lunches and snacks, and enough ingredients for a big one-dish meal. We are willing to eat the same thing for 2 or 3 days, then go back to Sobey’s again. So that has resulted in our 14% savings. 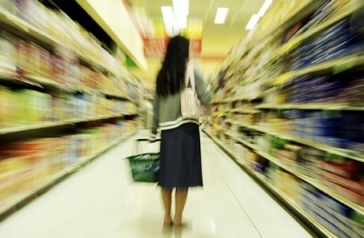 Areas where our spending went down because of buying “just enough”:

Areas where our spending has gone up:

One thing I’m deeply displeased about is that I have stopped baking entirely. Even before I started doing my big home inventory on the weekends, I had stopped making bread, muffins and granola. It would save even more money to get back in the baking habit! One thing I’m pleased about is finally starting to cook beans from dried, instead of buying canned. Now to find a recipe for baked beans that Rom will eat when I am at work  – he likes the UK-style Heinz ones in tomato sauce (but the Heinz Canada ones aren’t the same so he actually prefers the store brand!)

Just for   fun, I decided to track how much of our grocery budget is paying for packaged snacks, and the answer is $209 from January to June, or 8.8%! I am OK with that. However, I do solemnly swear that for the second half of the year, I will eat less candy, aaghh!!

To complicate things further, our “dining out” costs have been creeping up. There haven’t been any concerts or plays we’ve wanted to see in the past two months, so we had more dinners out instead. I calculated that we were out for 18 meals over 6 months, had take-out 3 times, and bought 2 frozen pizzas! Clearly we could have saved that money, and just didn’t choose to. It sure is an eye-opener to do the math, though.

If I were going to make just one change, it would be to have a couple of quick “emergency” meals in the freezer in case something comes up and we don’t have time to cook…other than KD or frozen pizza!

All in all, I think we are moving in the right direction, eating mostly healthy real food, and not being wasteful. There is room for improvement. But making meals is still an adventure and I like food and eating – not everyone does!

Have your grocery buying, cooking or eating habits changed this year?